During World War II USA helped the armies of the allies a great deal, in every possible way, including sending machinery and weapons according the so called “lend lease” agreement.

We have today one of the most exotic parts of this cooperation, that was very appreciated by Russian soldiers and was famous long after the war was over.

This exotic American give away was a production of a special canned pork stew designated to Russian troops and prepared according to the Russian traditional recipe. Russian soldiers are not used to those capitalistic foods you might supply us, bring us “The Tushonka”, this might was in minds of Russian generals who asked American government to send this special food to the front lines. This shot shows the actual tin packaging and its contents, as much as was in one can. It had big dose of fine pork stew packed in some good amount of pork fat. This was done as an extra measure for conservation, as if the tin gets some air leaks the fat around the food itself still protects it from contacting with the air and getting spoiled. It was an old way to preserve stuff way before tin cans were used – covering the food with fat and then store it. This way only the outer layer of the fat should be removed and then you can eat the rest.

Then they had also a laurel leaf and some pepper, and that’s it. The most tasty Soviet meal from WW2 times. Or was it an American meal?

Even the can itself was bilingual. It had a big Russian title saying what it was but everything else was in English. They still have the examples of the tins preserved in museums. There is a story that one man has brought a piece of tin can of “tushonka” to Soviet army general some forty years after the war was over. He had found it untouched and then the special military commission opened it and after some tests they declared that it was “a nice meat you can eat today, too”. Were the tests when someone actually tasted it? 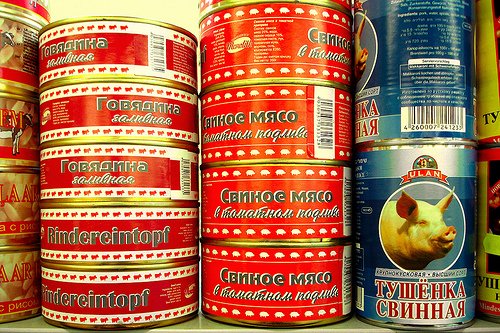 Nowadays, this is still a very popular meal in Russia. Different varieties are available from tens of different brands. One is missing – the original American Russian Tushonka from Cincinnati.