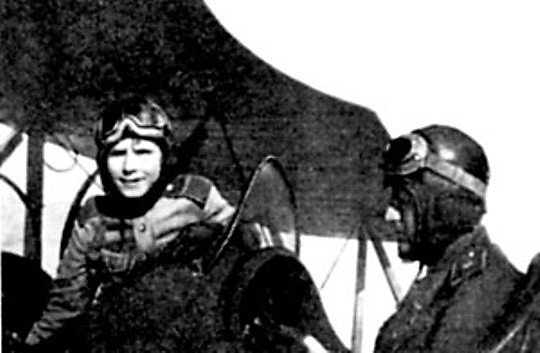 Coming back home from a usual flight, a pilot U-2 of air squadron noticed a storm-trooper lying on a belly on the midground. IL-2 cabin was close – probably a pilot inside was wounded. Mutual supportiveness  among pilots is a sacred law. U-2 parked taking refuge from Germans behind a storm-trooper. In the cabin really was a pilot badly wounded in his head. He had carried out his air photography mission but could not deliver the shot results to the base. Firstly the shot moved to U-2, then, at the cost of supreme efforts, the body of the saved wounded pilot. Gunners and tankmen protected the presumptuous cropduster drawing German attention to themselves, and U-2 luckily took off from the midground. Kamanin was awarded by Order Red Star. In July 1942 colonel N. Kamanin was appointed commander of the 8th combined and later the 5th assault air corps. In the 1943 he was awarded a rank of major-general and his wife and son Arkady could come to him. Wife stayed to work at the corps headquarters. Arkady strongly objected going back home and father appointed him a special equipment mechanic in the communications squadron of his corps – since he’d had some experience at one of the Moscow aircraft factory.

Being rather strong at materiel Arkady got a promotion – he became a flight mechanic and a navigating officer. He was rather persistent to gain flying practice. Once a random bullet broke a windshield of the pilot and debris made him almost blind.

Communications aircrafts were radio-equipped; Arkady called a skilled pilot and under his distant control Arkady Kamanin landed perfectly. He had 2 months of flight training and passed examination personally to major-general N. Kamanin who didn’t find any reasons not to admit A. Kamanin to solo flights.

His missions were getting more and more serious – especially when he affirmed his flight skills having left behind a messer that froze onto him. And one of his flights’ result was the rescue of that wounded lieutenant.

He saved another comrade-in-arms in Poland: waiting for landing clearance from a fighting wing he noticed one of pilots taking off with a mechanic on the rear end. A signal pistol blizzard raised circumspection of the pilot who had already retracted the landing gear. The mechanic was taken off from the rear end already on the ground though not without difficulty.

In 1944 sergeant Kamanin earned another Order Red Star: when the headquarters was under attack he, under fire, took off in his U-2, pelted the attackers with hand grenades and called reinforce.

In spring 1945 16-year-old sergeant Arkady Kamanin brought food and a secret pack to a partisan party having made an hour and a half – flight behind the battle line along the unknown route in the mountainous area with rugged relief. That flight was valued with Order Red Star.

And after the Great Patriotic War Arkady’s cherished dream came true: in autumn 1946 a 17-year-old veteran, medals and decorations holder, was accepted as a student for preparatory courses of Zhukovsky Academy from which his father graduated at due time.

… There exists such a sad professional saying:  “To take off a shoulder belt and crumble”. The youngest pilot of World War II Arkady N. Kamanin died from meningitis in April 13th, 1947, and forever remained 18-year-old hero.