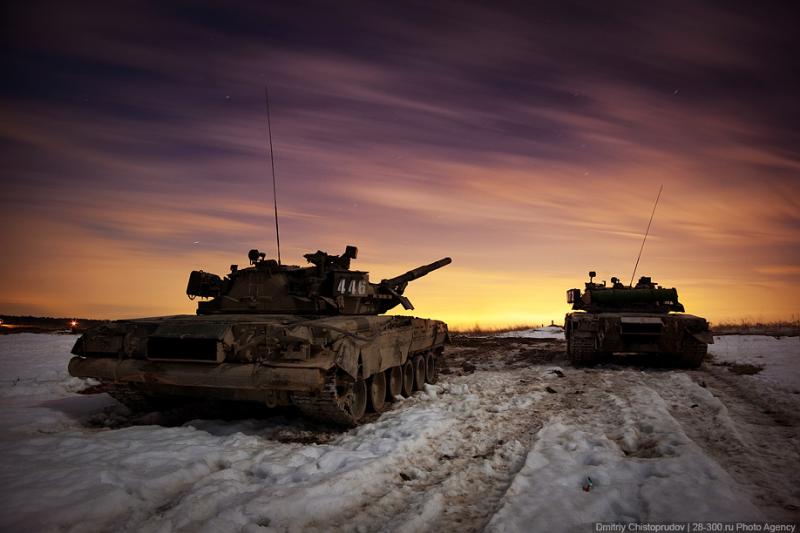 Maybe it is the first time you see real “alive” tanks and infantry combat vehicles instead of museum exhibits painted green. While operation they sound like a jet. In fact this is how a gas-turbine engine works. When they start shooting it seems you go deaf.

These are the pictures of the night tank playwar of Kantemirovskaya tank division under Naro-Fominsk town.

T-80 tank — the main battle tank produced in the USSR. The first production tank with a single gas-turbine power plant. In the inventory of the USSR’s army since 1976. During the playwar live ammunition was used. Fires far away  – the targets are hidden somewhere at a distance. And this is how a string of burst looks like at 15 seconds exposure. The gun’s firing rate is 12 shots a minute. Automatic recharge. The tank can easily keep pace with an ordinary scooter – it speeds up to 80 km/h. In the army’s inventory there are about 6500 pcs of T-80 in various modifications. T-80 were used during the first assault of Grozny and “Jihad” operation. In the battles the vehicle proved itself to be very protected. Sometimes it stands up to 18 kills of RPG. In October, 4th, 1993 six T-80 tanks of Kantemirovskaya tank division moved to Kalininsky Bridge opposite the White House. 12 projectiles of 125 mm calibre were fired at the house: two armour-piercing and 10 high-explosive ones.