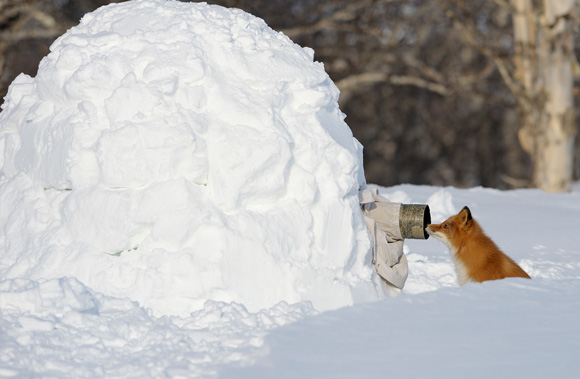 Thousands and thousands of years a hunting man chases wild animals to take their lives. The fear of the four-legged before a man became their instinct. But now, when the wild nature is shrinking like shagreen leather, more and more people strive to find themselves near these wild creatures not to kill but with another purpose. Such people are photographers – naturalists.

Each photographer who has taken up to photograph wild animals comes across a great number of difficulties and disappointments. Any little hare, duck or a sandpiper does not allow a man to approach in no way. At least closer than a rifle shot – 70-100m. So, on the picture animals often look small and running away in a sheer terror. To have a nice shot you should be able to stand 3-5m away from an animal. Impossible? If it was, many cool pictures portraying the most concealed moments of animals’ life just would not exist. The thing that can help is a properly made hide. N. Sladkov, a naturalist writer, wrote about the hide that he had made of four sticks and a piece of close cloth.  The man hides inside the hide and animals do not have any suspect. In fact the hide may be made in a different ways – it may be a small tent, a shelter of branches, a pit, a deep hollow, a heap of trees, even a brush pile – everything depends on the situation.

This costume of a wood goblin perfectly hides a figure of a man. Taking pictures of Caucasian goats from a tent in the Caucasus. The hide may be made of any material familiar to animals: straw, hay, grass, branches, old wooden chips. A pit is better to be dug in the hard soil and edged with any available material: logs, tarpaulin, boughs. In winter in snowy places it’s good to build hides of snow similar to an Eskimo igloo. Many habitual things may be turned to hides. A car, for instance. Animals do not take much time to get used to the immovable car or a truck. Hides should be set in advance in order animals could get used to them and behave naturally. It must be darker in the hide than outside so animals couldn’t notice any motion there. A lens hood should be long – many animals are scared of the front lens glitter. Some useful rules. Sound insulation is important too. Animals’ hearing is keener. So cameras shouldn’t be noisy. If animals see you coming in the hide they will know about your location. Sometimes you have to do it only at night. Some animals can  count badly. That is why two persons may come into the hide and then only one leaves,  the animals think that abstract “danger” has taken off. But some animals and especially birds of prey are rather strong in arithmetics. Some of them may count even to ten. For example, if six guys came and only five left, they won’t approach. So in order to confuse them the crowd has to be rather numerous.

And this is a photo report of a hide use in Kamchatka, though it was not quite successful. 14 thoughts on “The Invisible Man”