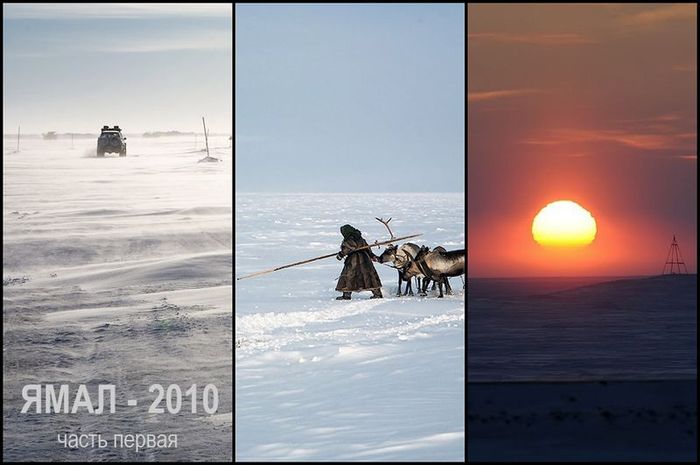 Yamal Peninsula – an infinite snowy desert, a border area, the largest gas extraction region … and the North of incredible beauty.

Those who come here usually call it expedition. There is no denying the truth, roads do not tend here. In winter there are ice roads, they are made right along the stream canals, the Ob feeders, taiga. Dozens of ice passages, villages,  and in summer only water ways may take there. Recesses…

But let us come back to Yamal Peninsula itself.
The ice road tends here from the side of Labytnanga, Obskaya station. In the beginning forest-tundra is around, there are still rare larches. And far away Polar Urals spurs can be seen. But further are fewer and fewer trees and soon  the last bush disappears. Seven days of tundra are ahead. The road is actually busy.
Dozens of heavy trucks go to Bovanenkovo – the main Gazprom perspective for today. The railroad has been built in Bovanenkovo since 1986. It is rather hard in permafrost conditions. Though trains go here anyway.

But they go not to the very Bovanenkovo despite the statements of Gazprom press releases.  The road is still 30km incomplete. Literally a year ago this winter road was being maintained. It was needed. Now nearly all the cargoes are delivered by railway. And the winter road got abandoned. As soon as the filling ends – begins the tundra. Just a track, hundreds and hundreds of track kilometers in the tundra. A little slope and a chance to turn over a 20 tons – long vehicle. If someone still can be drawn out – they try. There are no cars here. It is Yamal The Severe. People live here in the inhuman living conditions for months. Nothing similar to the Alps or ice roads. And proper vehicles are used here. Only “Urals” with all-wheel drive with all possible blocking and KAMAZ vehicles on the wheels nearly 1,5m high and with self pumping. Further  – only all-terrain vehicles. It is good if the average speed is at least 10km/h. No standing, only moving though slow. Those who were not ready or couldn’t move end like this. Flippancy is out of place here, everything is clear and plain. The way of moving along the tundra is cardinally different from the way we got used to move. In fact where “Urals” pass we can pass too, very hard but possible. And only tundra around and the wonderful sky – photo cannot convey all the beauty. It is getting dark rather early. Overnight stay should be arranged on the higher places – not to be snow drifted. Engines are never stopped. -32C is considered very warm. Deer seem to stray from the herd. Ahead are numerous polar foxes, partridges, deer, Nenets… And the shore of the Kara Sea.  Frozen sea-going ships and camps of the North.