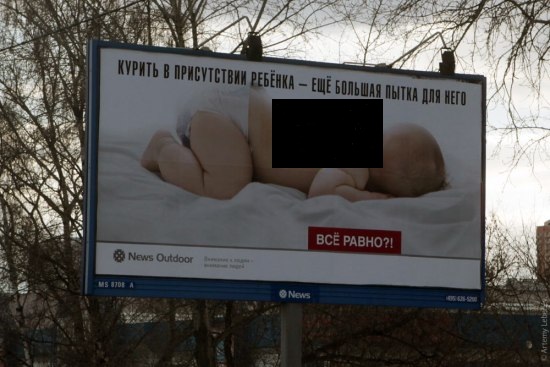 City streets got decorated by a new social advertisement. 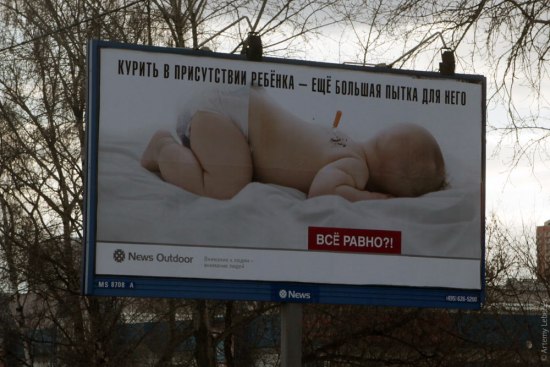 First of all – the title: it says – “Smoking in the presence of a kid is a more severe torture for it.” More severe than what?

Then we see a kid. As a result of Designer and Customer argument – the decision not to show its face (in order not to shock its parents once and for all) and cover its ass with a diaper (in order not to collect actions of irritable citizens).

Designer and Customer observed the result for a while.

Probably, initially Customer wanted to picture brain scraps on the wall and a blood fountain gushing from a ruptured carotid artery – only those who have no brains smoke in the presence of kids. Then Designer suggested to portray an idiot and write: “Are you idiots?” but could not find idiots pics in his image bank.

And finally they both found a cool idea and snubbed out a cigarette in the baby’s ass. But something was still missing.

Thus, the last detail appeared – an inscription “Don’t care?!” on a red rectangle. Here they used red color and highly interrogative construction – all details to question if you STILL do not care. Don’t care what they have depicted here?

And this all is supplemented with News Outdoor panel referring to people’s attention.

This attention is guaranteed.