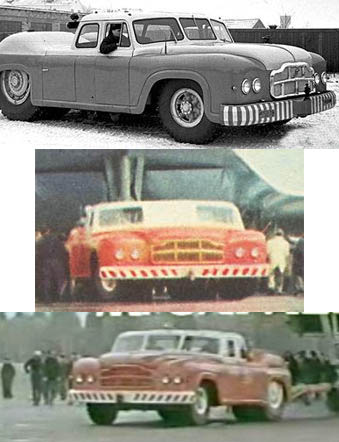 Looks like the world biggest sedan car was build long ago in Soviet Russia. It originated from Russian truck manufacturer and had a 38.8 litres engine (38800 cc). It weights 28 tons and can tow up to 85 tons load. You might ask how much is fuel consumption? We’ve got the answer, it had probably world worst record of 0.5 mpg (or 120 litres for 100 km).

What else was cool with this car is that it had two steering wheels from each side (don’t know why) and there were produced only three of them, and none of them is intact nowadays.

Also there is not much photos of it, but still we have a couple. As you can see it was often used to tow planes. And on this shot from one of Soviet movies it tows another Soviet relics – the TU-144 plane, first (and only) Soviet passenger ultrasonic jet. Some say it was out before the Concord and also as Concord it wasn’t used for very long.