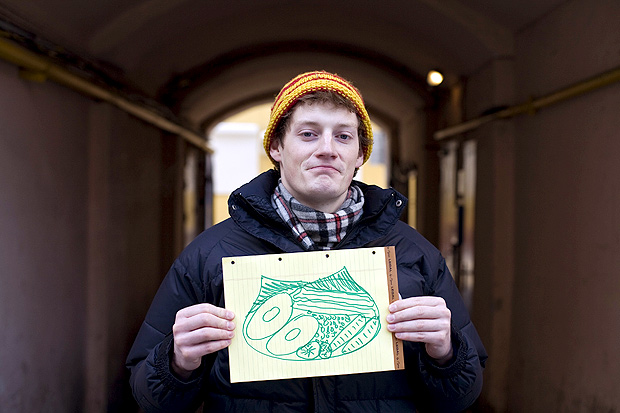 One curious Moscow guy initiated a survey on foreigners’ nostalgia for food. Let’s have a look at the results. First come the Englishmen.

Fried eggs, real bacon, toasts, tomatoes, baked beans and the main thing – pure English sausages. All sausages here are huge and of some strange taste – nothing to compare with pork sausages with herbs served anywhere in England. I adore them since I was a child. A sandwich, an apple and a pack of chips were a regular school lunch. My favorite ones were with marinated onion. The other special thing is their shape – like a monster’s paw with a whole in the middle. But maybe that’s for the better that there’s no these chips here because they are really unhealthy. In London one can visit a three-table-restaurant and make oneself stuffed with the excellent noodles. In Moscow it costs twice more and is served only in prestigious restaurants. But even there you won’t find good noodles. For some strange reason the main Japanese dish here is sushi and I never liked it much – it’s small and cold. Sunday brunch is a very nice English tradition. It usually consists of smoked salmon, muffins, sausages, sometimes spinach, eggs Benedict and champagne. You think it’s easy to find eggs Benedict in Moscow? No way. I tried them in “Luch” but they are tiny there and cost too much. Only several hotels and restaurants organize brunches but they cost four times more than in England. Going out and having a big plate of chicken curry for four pounds – that’s what I miss here. In London it’s always easy to find a place nearby where it’s cooked. In Moscow they serve it only in some Indian restaurants but it automatically turns into a big dinner. Not as simple as in England. A cup of British tea and a chocolate biscuit – I love this much. My favorite tea is Yorkshire one, it’s pretty strong. English tea here is rather expensive but still not the same. I don’t like the way Russians drink tea – with lemon, I like with milk. But even milk here differs. It’s not so fresh and as a result tea tastes in a very different way. It’s such a trifle but I always lack for it. It’s not a problem to find good English food here but meat or sausages need proper hot mustard but it’s a rare thing. They have here Twix or Mars but that’s American chocs and no any British ones. I like Cadbury very much. My favorites are with caramel. Generally, there’s a very poor choice of chocolate in Moscow. I’ve got bored rather quickly of eating the same all the time. Cola being sold here in Moscow has quite different taste comparing to English one. I can feel too much sugar in Russian cola. The other thing is there are a few vegetarian dishes in fast food cafes. I don’t eat meat but like fast food. It’s a problem for me here. It’s a really big pie for several persons. It’s cooked from meat, carrots and onion with spice inside and with potatoes and cheese on the top. Not the healthiest food but very typical for England. It’s especially good with bitter beer.

And here come the Americans I’ve spent 25 years in New York and have never tasted such pizza like there. Here one need to go to a restaurant to taste good pizza, in New York you can get it on your way. But the main thing I miss is Lucky Charms flakes. Popcorn – sweet, salty, spice, of various kinds and flavors, I get used to buy it ready-to-use. I’ve found it here only in cinema. The other thing I lack for are American pancakes usually served for breakfast with butter and maple syrup. I was born in Texas and the things I miss here are stakes and burgers. They have them here in several places but they are worse. And I also lack for Chinese food which is available anywhere in USA ad is very delicious because it’s cooked by the Chinese. There’s no really good bourbon here. I prefer Jefferson’s Reserve and Pappy van Winkle Family Reserve (15-, 20- and 23-year old). I haven’t 23-year old one in Moscow at all. I miss chipotle – smoked jalapeno pepper. It’s a Mexican product used for cooking lots of national dishes. I also like Pastrami – a sandwich with meat – typical fast food in New York and it’s not cooked in Moscow. They don’t sell my favorite thin capellini macaroni in Moscow. These are known as Angel Hairs is the USA. But still the main problem for me here is the lack of natural organic products – eggs, milk and meat. I live in Moscow for about 20 years. Earlier may products were hard to get but now it’s the matter of price. Now it’s hard to find a turkey but a product which hasn’t still appeared here is a traditional American Campbell`s soup .