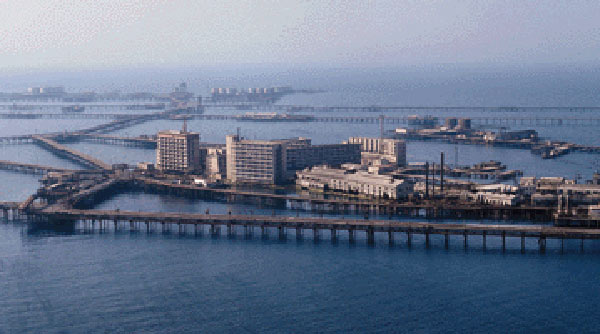 In 1940s and 1950s, right after the World War 2 Russia had to recover from the consequences of the Nazi invasion. Lots had to be done and as we know to complete something you need to have enough energy. And energy at that times as well as it is much likely now meant oil.

At that times the known oil reserves differed from what people in Russia know about it now. The main places to drill for oil was Southern Russia on contrary to frozen Northern Siberian regions as it’s for now. And the gemstone of the Soviet Oil production was Caspian sea region, mainly the territories that are an independent state of Aizerbajan now.

So after a massive attack of oil thirsty state the lands of this previously oil-saturated region little by little got exhausted of the black mineral treasure and the need for new sources of it arouse. Now it’s not clear who was that this genius who first came up with an idea of getting the oil right from the sea bottom where it was still plenty of it and for this purpose to build a real city 42 km (25 miles) off the coast right in the middle of the sea, but what we know is that this idea came into play and by some crazy chance it got support from that times Soviet leaders who leveraged it with the all support the biggest (by the territory) state could offer at that time. What this meant is that in a matter of just a few month a real town was built right in the middle of the nowhere on giant steel blocks coming from the sea bottom, from as deep as hundreds of feet down. And they called it “Oil Stones”. And that was really a city! Just one fact: the length of the streets of this one-of-a-kind town was exceeding 350 km (200 miles) if combined. There were nine stored buildings, schools, industry complexes and fountains. Lawns with green grass and children playing ball. And all that is forty two kilometeres from the nearest Earth surface close! As Soviet Union was keeping its achievements behind the iron curtain less was known to the rest of the world about such engineering wonder being built. Later, the new Northern reserves of oil were discovered which exceeded hundred times the ones they had in Caspian Sea region so the Soviet oil production industry giant moved away from that place, making it semi abandoned. But even now this place according to what has been said has more than the 2,000 inhabitants. A true example of what human is capable of achieving, maybe one of the biggest man made structures on Earth and how small we sometimes know on such places around the world. Also there is a good old Soviet documentary footage from this place, made on its rise, where you still

can see the fountains working, people are happy and no shadow of coming times can be guessed looking

at the place itself and at the faces of its inhabitants.

42 thoughts on “Oil Stones: A Soviet City in the Middle of the Sea”