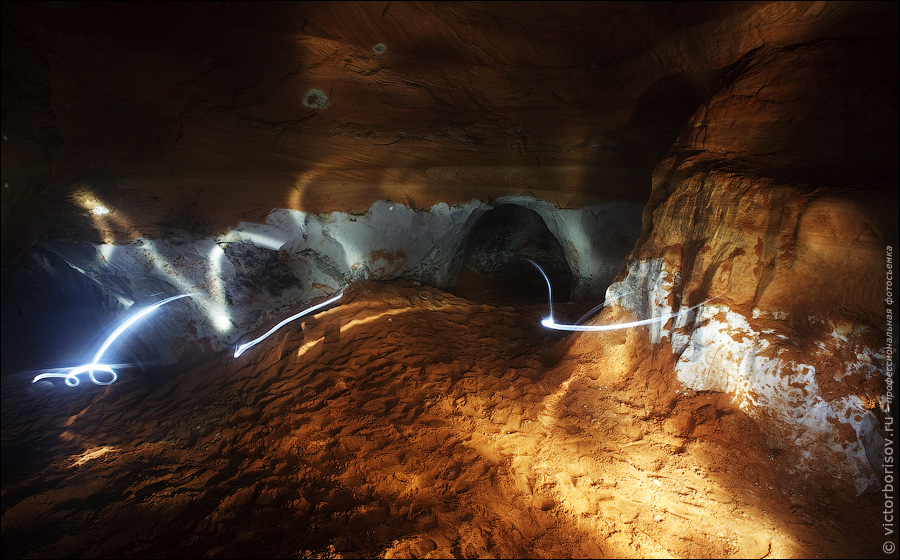 Saint-Petersburg region can really boast of some beautiful and remarkable places; and Borschevsk Caves is one of them. The caves are located at the Antonovo lakeside nearby Oredezh village, Saint-Petersburg region. And the most unusual thing about them is that it was not Mother Nature which made them but people themselves. There are several caves over there which face the waterside. Actually, most of them already broke down, but some are still intact. A team of Russian photographers went there specially to make a photo story of a place that previously has been unknown.

It is -25C (-13F) outdoors and something about +10C (+50F) inside the caves so at the entrance there formed a beautiful mosaic of ice built up. 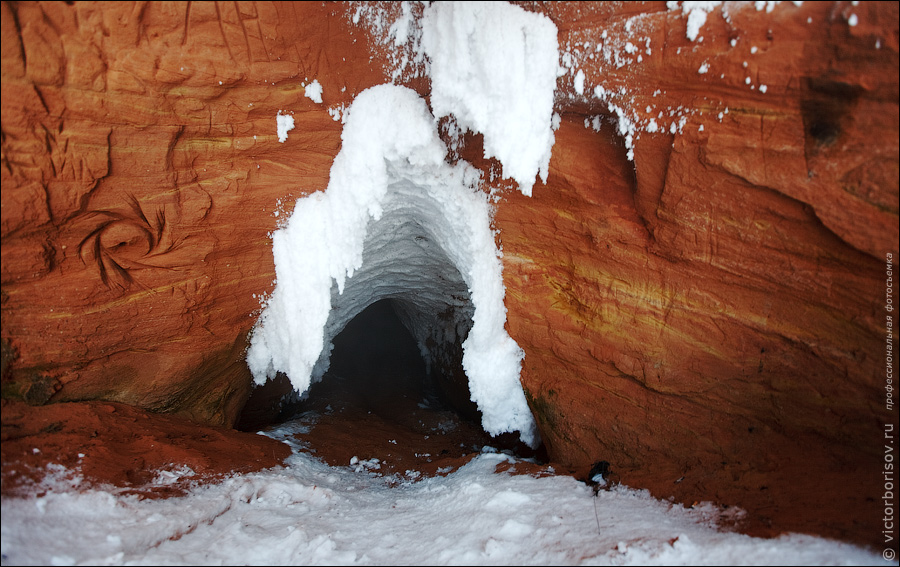 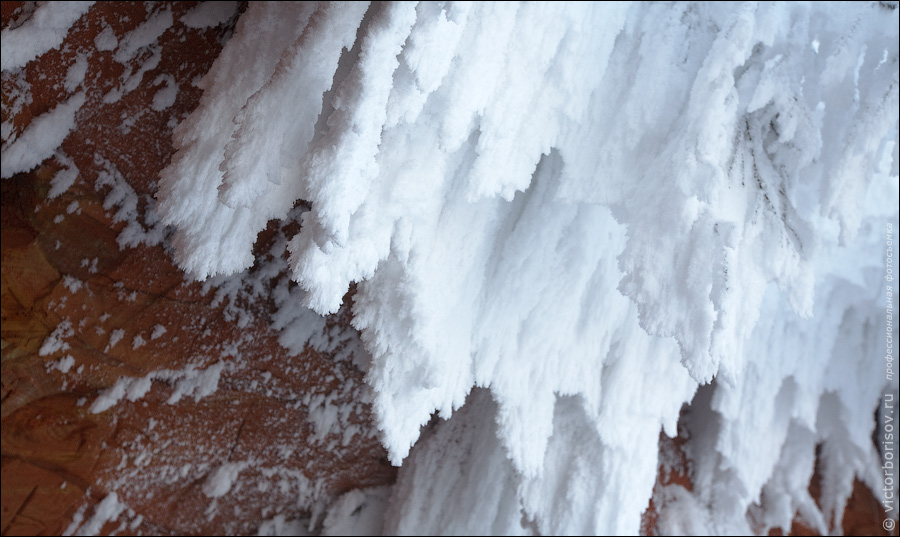 A long time ago there was quartz sand quarried and then being delivered to Tarkovichsk glass factory. Unfortunately, the factory is abandoned now. The quarrying was carried on by the peasants that were driving inside the adits right on their animal-drawn wagons. That’s why all the cuts have such a strange shape (5-6 meters high or 17-20 feet.) 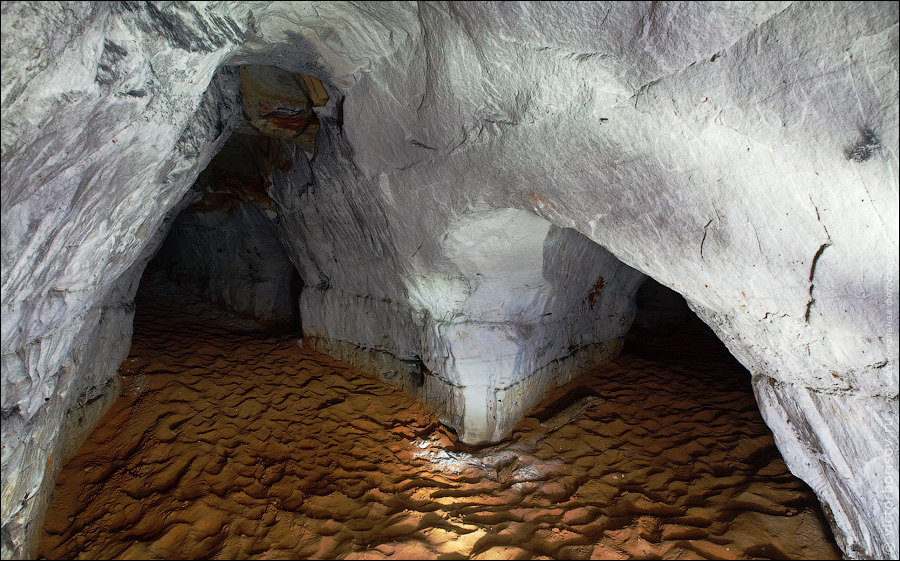 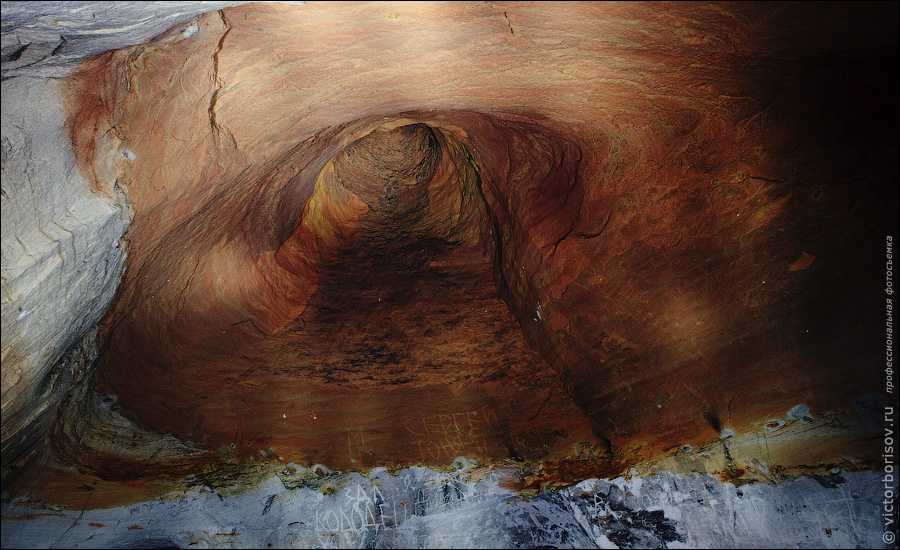 Actually, such sizes are not measured up to the mining standards and there is severe process of deterioration taking place in the caves now. 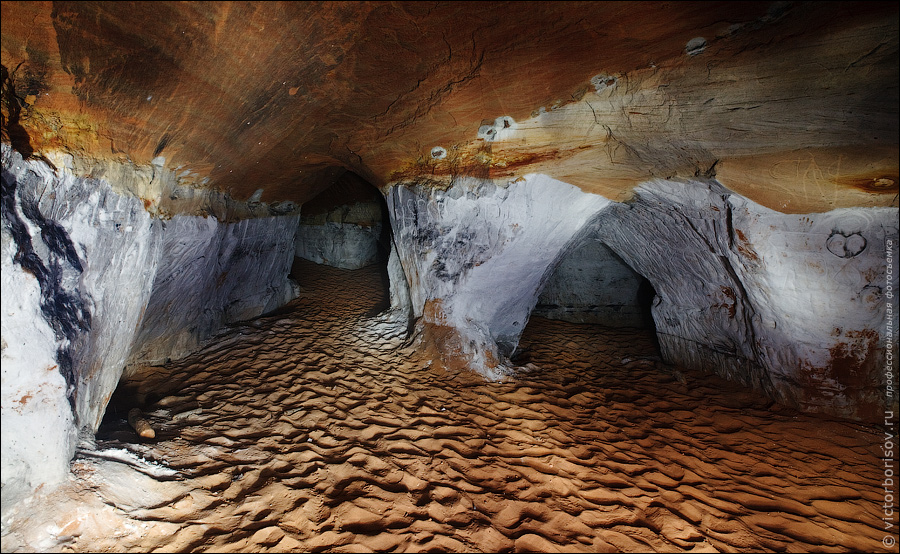 On this picture you can see the bedding of rocks in the cave through and through. Over the snow-white quartz sand bed goes a honey-dew rock bed blending into some wine-colored rock. Roof height is 2,5 meters or 8 feet or even higher so you can walk around the caves without stooping, but now and then sand cave roofs collapse so you need to be very cautious. No one is allowed to the caves in spring or while the rainy season. Loud speaking is not allowed, of course if you don’t want to find yourself buried under the rocks in one of the passages that spread over more than 500 meters (165 feet) underground. Some cave chambers are so nicely made that you can enjoy their beauty for many hours. The author of the photo story said that it was one of the most comfortable and nice caves he was in. Soft sand under your feet, white walls and brown ceiling with mosaic patterns on it. Looks very cool. What a shame that soon these caves will cease to exist for ever.