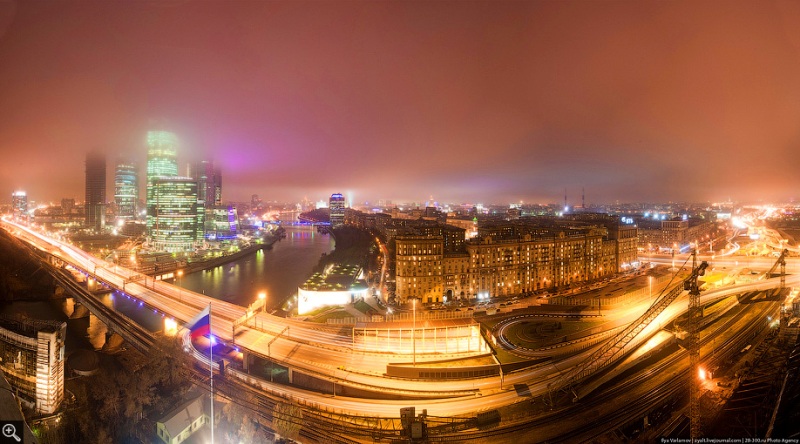 Today our dish is picturesque photos taken from one of the balconies of the business complex “Mirax Plaza” in Moscow. So, let us begin. The Third traffic ring. Dorogomilovsky highway bridge is spanned over the Moscow river. Initially it used to be Smolensky railway bridge used to span two stations – Kutuzovo and Testovskaya on the smaller ring of the Moscow railway in Byelorussian direction. Then in 1998 with the beginning of the international centre “Moscow-City” construction the railway platform of the bridge was dismantled, its bearings were modernized and a new double-deck platform was set up: on top are the lines for cars and lower are the lines for high-speed trains from Sheremetyevo in the centre and for pedestrians on the periphery. The urban beauty as it is.

The view of “Moscow-City” itself. On up front is the complex “Embankment tower”, it used to be the highest, now the leadership belongs to a multifunctional complex “Capital City”. As the overpass is narrowing, there is a terrible jamming in the “Moscow-City” area. And now the overpass is actively being widened. And here is the “Northern Tower”, one of the ugliest buildings in the Moscow International Business Centre. It is constructed in the manner of “a yacht” and it looks especially awful when multi-colored lighting is on. It seems that the terrible giant starts smiling with its toothless wonder smile. Cute colorful lights, cheap composite panels, merry blue glass, what else for the modern Moscow architecture? Only such a tutti-frutti picture. The traffic interchange of Kutuzovsky Avenue with the Third traffic ring. That is a unique for Moscow five-level system providing traffic of cross transportation flow. The Moscow wonder has been built for 23 months. Many design conceptions are rather enigmatic. Thus it is not clear what for these nice sheds have been made. And what is the purpose of these flowerbeds, benches and alleys on the junctions? It is really hard to imagine people who would like to take a walk here. By the way, the skyscrapers are very beautiful in fog embracing their upper floors. Time seems to stop when you look at it. But the fog won’t prevent us from peeping in the windows. Well, what’s there? Let’s zoom in a little. Aha, the working day is over but someone is still on the “groupmates” website.. And let us not have a look in the windows of the government house…for some ethical reasons. We’d better admire the foggy scenery again, all the same – the skyscrapers in the fog are gorgeous. 19 thoughts on “Moscow City in Fog”