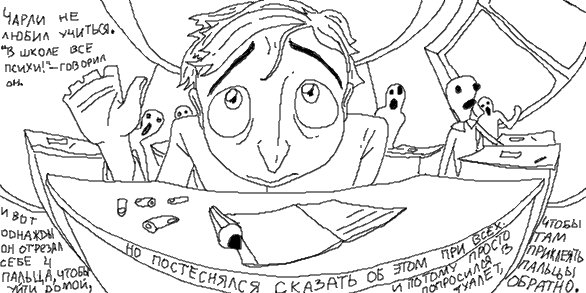 For several years Russia, as well as other former soviet republics, together with the rest of the Internet world suffers from expansion of the social network services. For the moment the most popular of them here is Vkontakte (“in contact”). It is often considered (without any official confirmation) that its design, style and architecture were “stolen” from Facebook.

But still, with all these rumors, it has plenty of its unique features and possibilities. One of them is an opportunity to create more or less simple paintings on a page of any user who is your “friend” with just one brush of variable size. It was named “graffiti” by the authors of the site because it can be used in the part of a user page called a “wall’. Though this simple instrument is mostly used to create a “unique” inscription in handwriting (something like “Happy 19th Birthday!!!” with a pretty contoured candle cake), some users are trying to present it as a kind of art. Definitely, some of them have mastered the technique of such painting quite well but it is still just a primitive drawing instrument. After the number of Vkontakte users exceeded 10 millions, graffiti has become a way to show off, to stand out against a background of other users, as well as userpics. Now a strange and even ugly drawing left on your wall by some of your friends is considered a great present and causes endless discussions on the topic of its creativity and niceness. Certainly, there are some talented people who can use this instrument to create a copy of Mona Lisa at their laptop using a pocket mouse and without any hard and flat surface. But recently a series of software was created by some enthusiasts which allow converting any image to Vkontakte graffiti in such a way that it looks like have been drawn with this tool. Using it one can proudly declaim that he drew that beautiful sunset with natural color gradients using only his mouse and firm hand.
But let’s leave the technique questions alone and have a look at the contents of such drawings. It’s hard to explain why, but plenty of them are such depressive, bloody and even insane that it becomes terrible to think what problems their authors have. So the best “artworks” in Vkontakte graffiti deserve something like “Wow! A nice picture!” Not more.