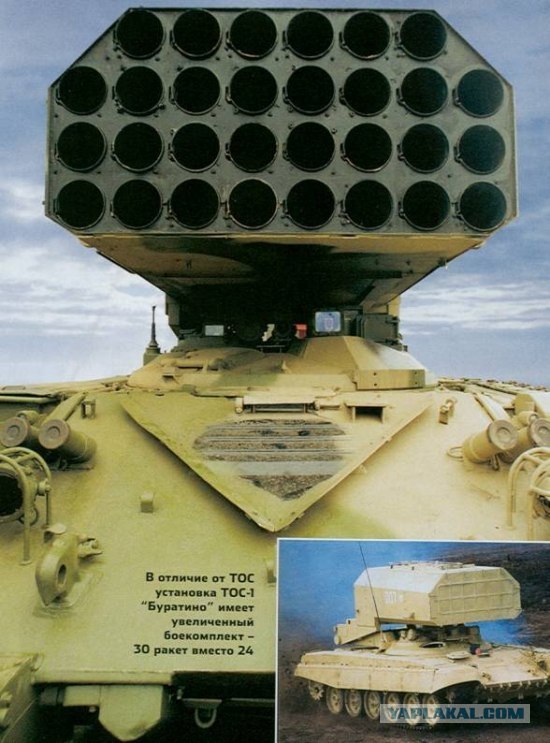 There is a quite exotic weapon in Russian army – a heavy flame-throwing system HFS-1 Buratino. According to the data provided by the Russian arms company, its barrage destroys everything that lives within a radius of 3 kilometers around its target. Its ammunition contains mixture of liquids (propyl nitrate type) and light metals (magnesium powder). During the flight of such ammunition the mixture is being interfused with internal device in order to gain uniformity.

So called vacuum effect resides in the principle that at the moment of mixture detonation all the oxygen in the air comes into reaction simultaneously. Fast combustion of oxygen leads to decrease in pressure (by 160 mm of mercury column). This makes basements and bunkers nearly useless shelters – lungs, eardrums, eyes, and viscera are being torn apart by the pressure difference.

Engagement range of the unit is 2700 to 3500 meters. All 30 rockets can be released in 7.5 seconds. However, battlefield functional area of the FHS-1 is rather limited due to its tremendous destructive capability.

In Chechnya Buratino was used exclusively under cover of several tanks (1 or 2 in front, 2 on the sides) due to its vulnerability to grenade-launcher fire, anti-tank weapons and recoilless weapons. Damage of the unit, and thus, chaotic rocket launch or even ammunition detonation can cause serious damage to friendly troops and civilian population. Human rights defenders call Buratino “the hell’s ambassador” due to presumable cases of mass destruction of civilians. The fact that there are no witnesses of such actions doesn’t seem to disturb them – as it is said, nothing can possibly stay alive in the radius of 3 kilometers. All possible witnesses simply turn to ashes.

So why Russia remains the only country to produce such a fearsome weapon? And why even in Russia’s own army quantity of these units can be counted on fingers? The matter is that in the late 80’s Soviet military commanders were astonished by new developments in the field of thermobaric and volume-detonating ammunition. No wonder! Visually detonation of a shell with large enough mass looked like an explosion of a small-sized tactical nuke! So, all army branches wanted to have such weapon in their arsenal.