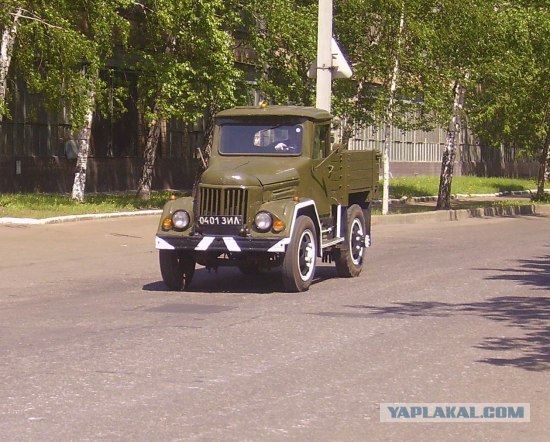 For intra-factory needs itâ€™s not always convenient and profitable to use ordinary equipment (tractors, pushers, loaders etc.) due to many vital reasons â€“ either transportation of heavy details and aggregates from shop to shop or banal tightness of money for specialized machinery), besides, as a rule, there are a lot of unutilized materials such as spare parts or simply written-off equipment that hasnâ€™t been cut to metal junk yet. Necessity is the mother of invention and itâ€™s not a secret â€“ Russians are fertile with brilliant ideas â€“ thatâ€™s how so-called â€œstumpsâ€, â€œcrocodilesâ€, â€œbigheadsâ€ etc. are born into this world with the only purpose â€“ to make human life more convenient and peopleâ€™s labour easier.

The recipe how to make these cute monsters is rather simple. But nevertheless itâ€™s a wide field for positive creativity, creators may show what they can, express their good sense of humor, to be serious and to be mocking at the same time. Usually the monsters are made of a stub frame and additionally mounted â€œdevicesâ€ such as winches or cranes. Though, there can be exceptions. Russians are rather keen-witted (no sarcasm!) and detailed specifications of the monsters are probably known only by their creators. Generally these vehicles are strictly forbidden to leave the territory of a factory. So they have to live their life staying inside with no chance to show out.
People even put up monuments to some of them. And they do deserve it! For instance, â€œZILâ€ factory has put their â€œbobikâ€ on the pedestal. It can be seen from the window of a subway car on the half-way from Avtozavodskaya station toward Kolomenskaya station in Moscow. By the way â€“ â€œZILâ€â€™s â€œbobiksâ€ are the most widespread models, but, unfortunately, their number has crucially decreased. There used to be too many of them and now two types at most are left including that monument. The most striking model is the â€œcrawler-bobikâ€, the cutest one is â€œcheburashkaâ€ the handsome â€“ a written-off limousine â€“ chassis mounted ZIL. Nearly each monster vehicle has its history, its legend, they are really alive and they seem to keep lots of secrets. Arenâ€™t they the most portraying symbols of the whole epoch? Isnâ€™t that a bereavement to lose them? Wonâ€™t that be the most entertaining exhibition if there would be a chance to put them all together in one place exposing the reality, so shameful, so amazing, so weird, so touching? Our reality. 11 thoughts on “Monsters of the Epoch â€“ Forced Invention”