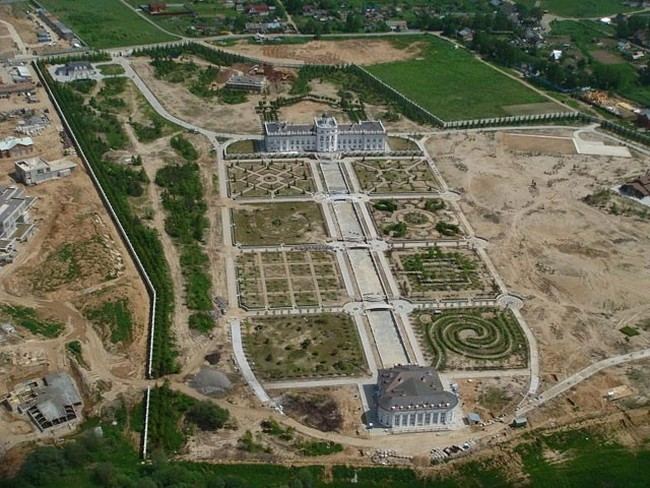 A posh palace is being built on the bank of Istrin water reservoir in the Moscow region. It’s a mansion looking like a huge 18th century palace, which is already informally named “Istrin mansion”. Its appearance, quick development and approximate cost were recently debated in Russian blogs. But still having some guesses about who could own such a luxury, no one has an official confirmation on who the lucky man really is.

The thing is that this building together with its adjacent lands was earlier presented in Google Maps, but now there are no any marks of it. To be convinced see the photos under the text.

We can only guess how serious this person is that even Google hides his property. The palatial and park complex is seen from everywhere here in the Berezhki village. The main building (that’s how it is mentioned in the design documentation) stands in the very center of a huge 31 hectares plot. A roof of a blue pseudo-baroque building is decorated with white vases. The major part of the territory is walled with a high concrete fence. The fence from the side of the bank is netted so one can easily see the other buildings from here. The way from the palace to pavilion is lead by a canal (not filled yet) with a big French-styled park with future fountains along the both its banks. The other buildings here are a garage and a turret with a weathercock built for some unclear purpose. Specialists in architecture state that this architectural complex in whole looks very similar to the famous Peterhof Park near St.Petersburg.

Local administration clerks confirm that construction works here have been lasting for about 5 years. One of the local residents informed that he worked at the construction several years ago and he earned quite some money there. He said that there were about 600 people working at that time, now – something about 300. The palace construction site, as well as the nearby built cottages, is guarded by some private security firm. Its representative resolutely informed that he‘s guarding an object of the national importance but refused to specify what the object is and whom it belongs to. Financial experts evaluated the cost of the land and buildings of the palatial complex equal $16 million and $27 million, respectively. So something about $50 million is the price for your property to be accurately erased from a free displayed satellite image. Not a secret status as it was thought before.

28 thoughts on “Posh Palace in the Moscow Region”