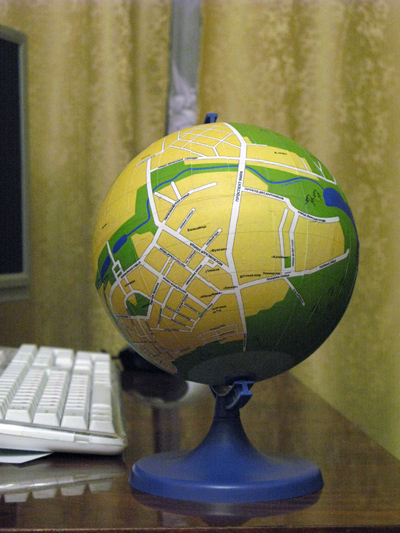 In Russia and other post Soviet countries there were a real craze on independence after they finally got it with USSR collapse. Sometimes this took some weird forms like, for example, making the globes of their own country. Yes, those were just like regular globes we used to see on geography classes but instead the whole world only their own country was mapped on it.

These things were officially on sale and still you can buy something like “the globe of Ukraine” in shops of Kiev.

So then people went further and decided to make the globes of their local cities or even villages. With modern technologies this can be done by practically anyone just in a few minutes and then can be used to amaze the friends and relative. We’ll show you how. As a result we can get such neat globe of your place like on the picture above. You would need some ready made globe that can be acquired from a shop. Then there is a need of a map of your desired planet. It can be just a map or satelltie map or hybrid map, anything would look cool. It should be in 2:1 proportions. Then you need a photoshop software and a plugin called Flexify 2. It’s free for 30 days.

With its help you can create such image and then print it. Then with a help of a glue just attach it to the globe. That’s it now you’ve got your own very personal planet.

Below are some more examples of a globe of Ukraine that can be bought in shops and globe of Estonia that was made by someone else using this technique.