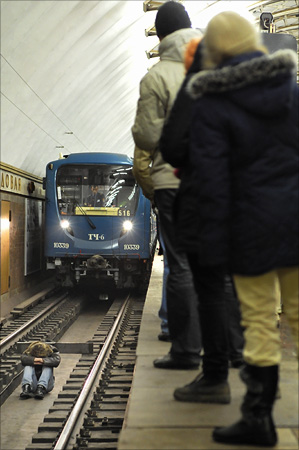 Going to the subway last tuesday was problematic in St. Petersburg because trains got stuck at one station without any chance coming to others in time. The young buddy sitting on the rails was the cause. As officially declared this was thought to be a suicide attempt but rational thinkers from the platform started giving him advices that it’s more effective for him would be to grab the rails with his both hands, then he would easily be approached to his target with the means of high voltage shock causing his suffering heart to go out of scale.

Anyways he caused the subway schedule to be broken bad time so the police emerged and took him away. 21 thoughts on “Buddy on Rails”