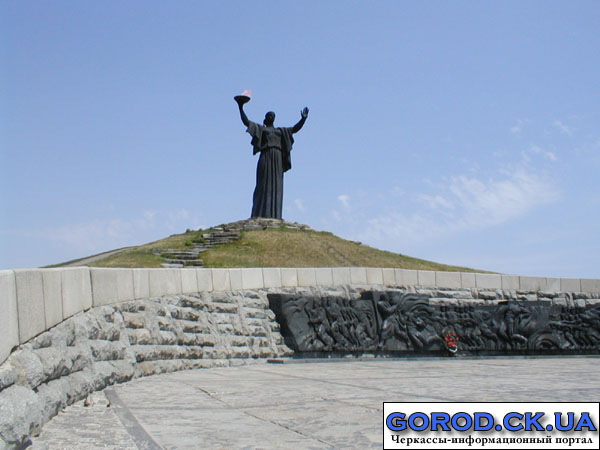 As time passes by new technologies emerge, that’s a natural outcome of humanity progress. In Ukraine they have new technologies at their service. Sometimes it’s turns to be a bit too much as some say.

Here we have the monument to the Motherland erected in Cherkassy city shortly after the World War 2 ended to commemorate the memories of the dead in action heroes. During Soviet times it was a popular place according to this black and white shot. People visited it

on special occasions and just for fun – there were not much places to visit back then. And always the gas torch was blowing on its palm symbolizing eternal memory. Elder people were admiring

them, progressive youth called the monument “The Girl with Sambuca”. Such kind of

fires can be met worldwide and in Russia they are called “Eternal Flames”. But nothing is eternal on this Earth as we know. When the Soviet Union felt down and states that

In this particular case that meant “You would have no more free natural gas, Ukraine!”. So this fossil fuels the

realities!). So the it was shut down.

For years it was standing without burning torch and no renovations were running, looked pretty abandoned.

But then… new technologies came into a play! them – high above the city scape. So now, nobody could suspect Motherland statue to carry burning drink. Everyone can clearly see that

it’s a flame, an eternal one. “It consumes not more than 400w”, says one of the officials. Yes, really And veterans are glad that something is burning again. Well when one has not to sharp eyesight

it’s not looking so much different.