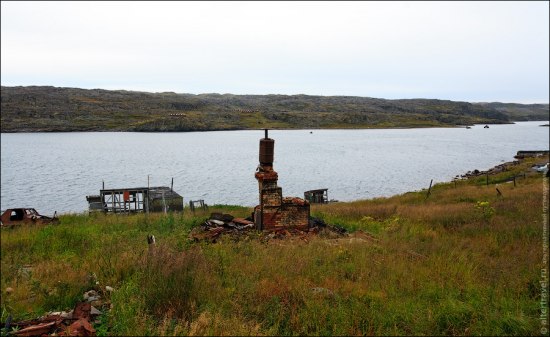 The village of Porchinikha was made by soldiers as a base for atomic submarines. It’s the most northern point of the Kola Peninsula on the Barents Sea shore with the road. There are mistakes in maps, soviet cartographers put this road on the map instead of a corvine path. Drive on the off-road? I wouldn’t be that sure.

I found this place long time ago, when discovered a world of geocashing in 2004. One of the virtual caches buried here as well. It’s amazing but since 2003 (the date of the cache burying) no one took it, everyone puzzled: “Is it a foot or a water path?” Everyone saw satellite photos and couldn’t get how it is possible at all to get here without taking off the ground.

Just look at the POL barrels on the other side. Most of the buildings are demolished peace by peace slowly.

Guess, what is it? Do you think it is a bus stop? Or a berth? No, it is just a mere ordinary toilet, there are two holes in its bottom right below water and the surf plays the role of sink. Many interesting boxes were brought here. And just left to rest in peace. In these boxes there are blocks of oxygen regeneration V-64 produced in 1972. They are used on submarines. In the case of emergency the block is activated by the special key and as a result of the chemical reaction pure oxygen discharges and gas is absorbed. This scheme could be used in diving equipment. Off-roads were already dismantled. Generally, most often this equipment went to such hard-to-get-to places once in a life, it transported the cargo & was left there. For the next transportation a new one was sent. Militaries know how to waste money. The ship was thrown onto rocks nearby & was awfully damaged. An inspection house and a trigger point. There are bunches of them. Rocks, water, rubber and rusty metal… No people, but wild animals live here. It is cool that we did not meet a bear.

People there have a lighthouse and radars. Again stones and water. Some flora. It’s all that you can see here. But theoretically there is life nearby. It’s an island called Bolshoy Oleniy.