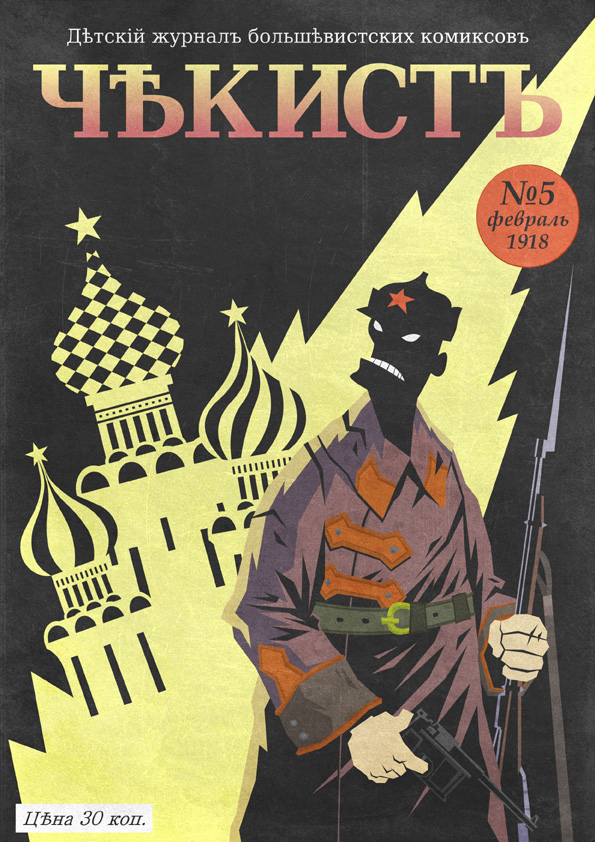 Here are the covers of some of them.

The first one is “Chekists” or if to translate it something like “Special Security Agents”. “…In 1918 the new Special Agents comics series appeared and gained huge popularity. The violence level increased with each next edition, and eventually every page had scenes of murders in it.” “..Just a few years later, in 1922 a new comics was even more popular. It was telling stories about the life of young TroTro. The last series took place in Mexico”. Here, there are parallels with Mr. Trotsky – Russian politic, former Communist who fled from Russia to Mexico and later was slabbed with a hammer there by Soviet special agent. “…In the end of 1920s publishers try to gain interest from rural Soviet citizens making new series like The Communal Farmer and The World of Future. The stories of those books take place in future, in year 2000, when every Soviet farmer could enjoy benefits of the Communism.”. Including those ten feet tall rural robots. In 1940s the urge for violent content has sprang again. The series about the adventures of the Farmer Man was put on hold and it was replaced by this new “The Invincible Red Bear vs. Invaders”. The first edition came out in 1941 and they were pretty popular for a few years, but after 1945 their ratings got low, until they were discontinued at all.” “…In 1980s Soviet people have completely lost the interest in the old heroes, and publishers couldn’t come up with something new, except this “The Mutant Pioneers” series which didn’t last long.” “The last one was “Gorbert”. The story of Soviet comics ends on it”. It was associated with Gorbachev.

“Then the Era of totally new comics has begun”.

Well, the comments here come from original artists who created this stuff.