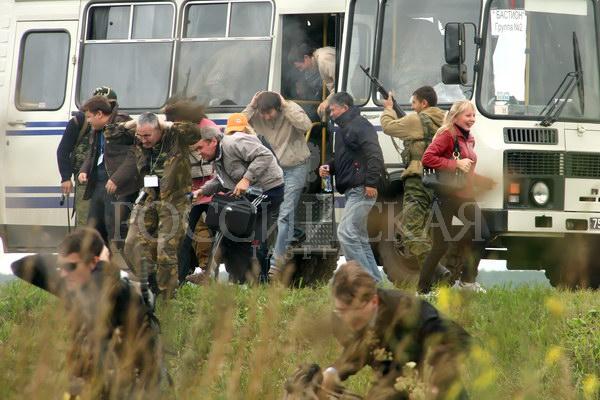 A group of journalists were kept as hostages by a bunch of Southern looking guys dressed in military uniform. Well, almost. It is a new experience one can get in Chelyabinsk city, Russia in the recently opened special courses of “How to behave during if you was taken as a hostage”.

First a bus full of people is being stopped in the middle of nowhere by a bunch of Arabic people yelling “Allakh Akbar” each and every five seconds. Those are not real terrorists, but Russian SWAT soldiers carefully picked by appearance – with Southern roots so that they could resemble ethnical Chechen or Arabic threat. “Face to the ground!” was a command and all the “civilians” were forced down to the muddy field in all their good cloths and stayed such for quite a while. “We were treated really rough, no matter man or woman”, remembers one journalist. First, all the cameras and mobile phones were seized. Firing from the real guns with real bullets. Just to keep everyone intact. After a while all men were searched again. Those who had mobile phone hidden

somewhere in the pocket were convinced that they are wrong. Looking bit tired, eh? Indeed some of them were, after three hour walk across the fields to the hidden

shelter of the world’s terror. And finally the saviors came. After a long fight… The hostages were saved. 31 thoughts on “The Hostages”