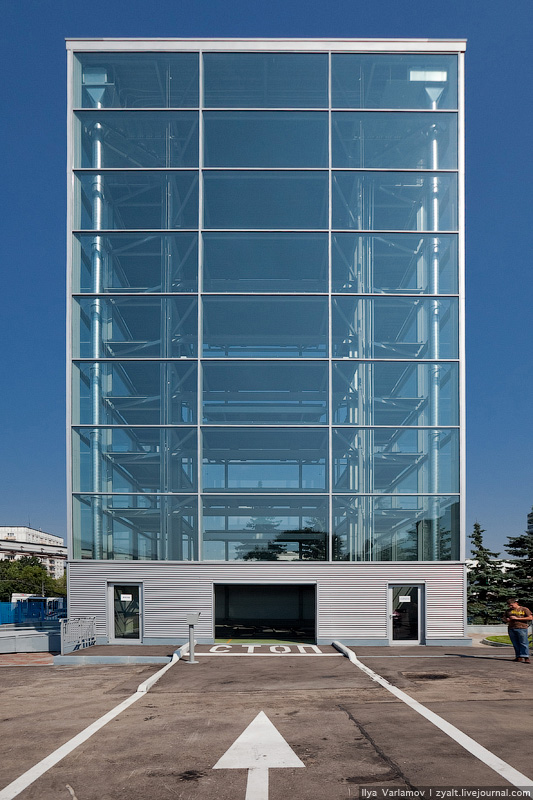 The main problem of drivers in any big city including Moscow is where to park, especially when you are in the centre and there seems to be no free lots for a few decades more. In Europe there are loads of parking paid space, and they even have special buildings just for autos. But here in Russian that’s not a tradition yet, though, it really should be. One way of solving the problem is constructing multistory automated parking garages, and Muscovites are about to make these glass buildings widely spread (of course, if they will manage to save up money enough to cover enormous expenses). 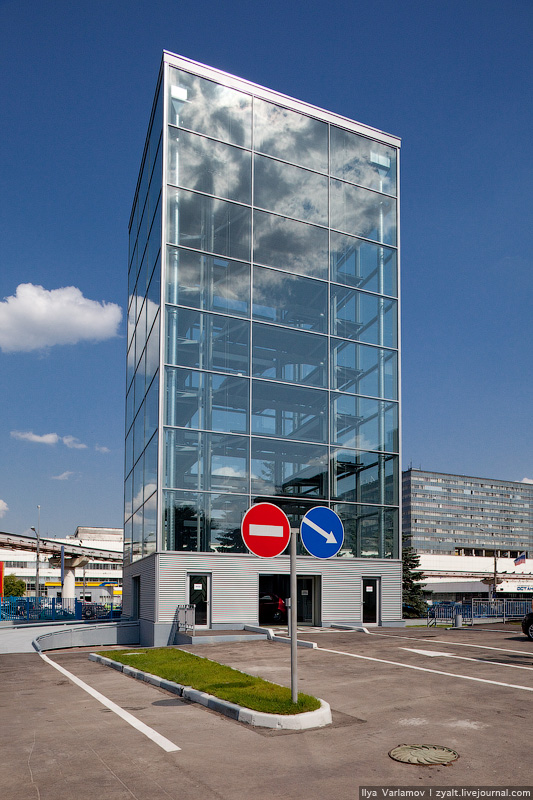 The most awesome thing about this parking garage is that it can have 34 and even more autos at a time on a space of a bit more than 100 square meters. 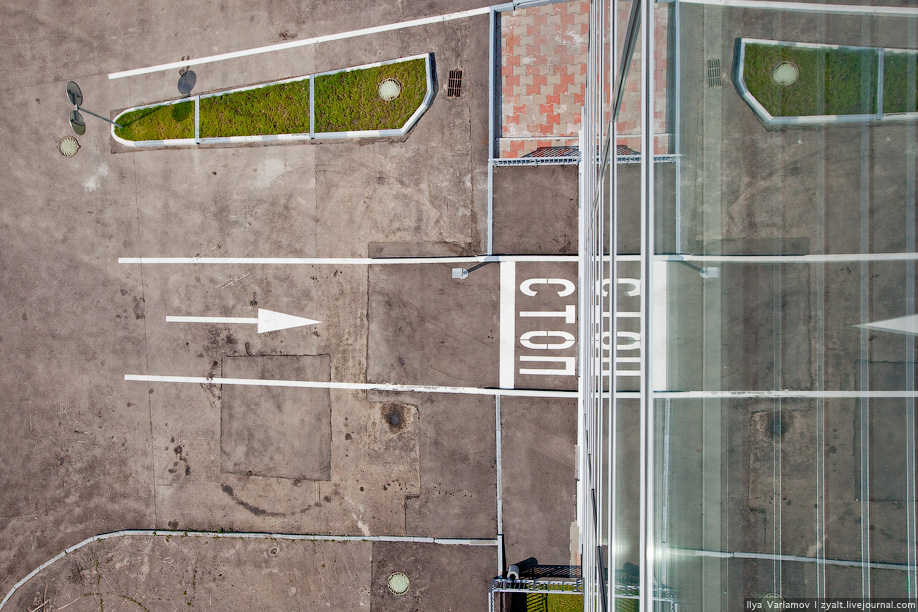 The construction is made of metal frame, its elements, mainly special blocks, are easily put on each other on the same principle as a kids’ construction set and requires no wielding at all. To me it looks more like a house of cards than a stable structure, too light and too shaky, but it’s just an illusion (I hope), as almost every wall there is transparent and looks airy.

One of the major advantages of the construction is record-breaking terms of building, the project is usually implemented in 30-35 days or so and the site is ready for launching.

Depending on its height (22-28 meters), the tower can have 6-14 levels or floors and provide space for a great deal of cars – from 22 to 54 big and small vehicles. The towers can be easily coupled with other one of the same type, be attached to apartment houses or administrative buildings as well as deepen into the ground for as many floors as it’s needed. Forget about the time when you had treed in front of you bedrooms, not it’s era for cars to be next to you window, that’s quite an unexpected thing, isn’t it?

Before getting into the conduction, you (if you are a driver) take a card. 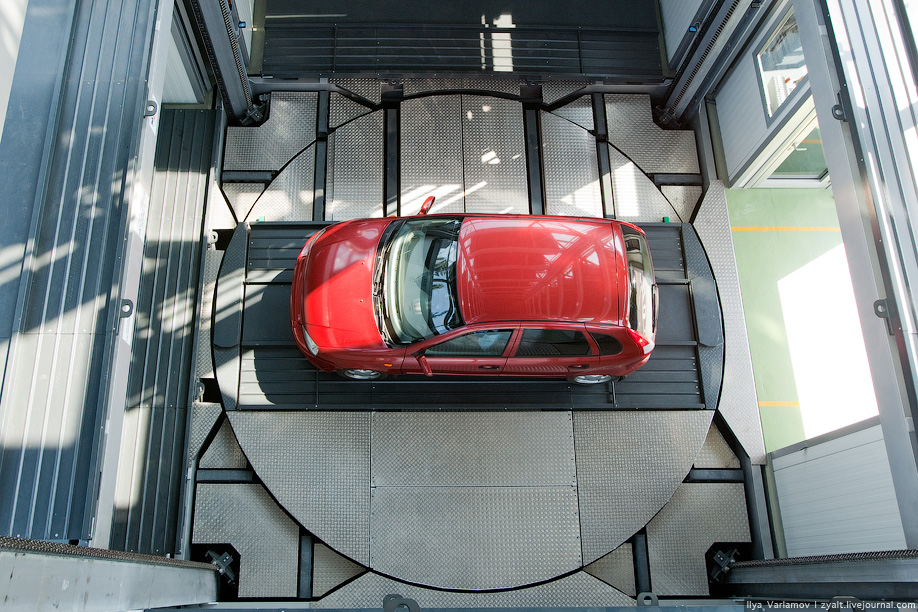 You vehicle is lifted on interchanging moving pallets, which are placed on a lifting and lowering gear, which consists of a rectangular platform with a middle circle turning 360 degrees. 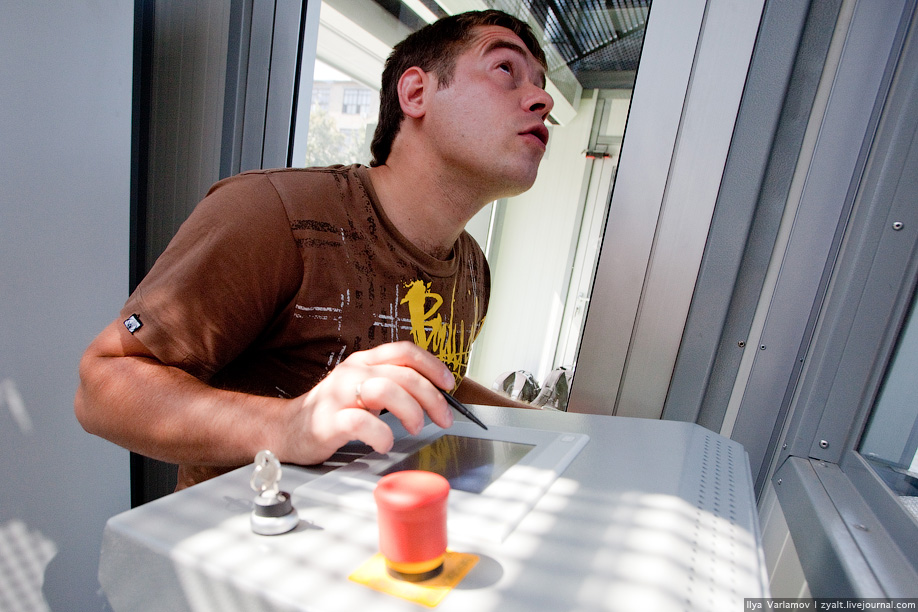 An operator can control the parking both on his computer and the sensor screen. 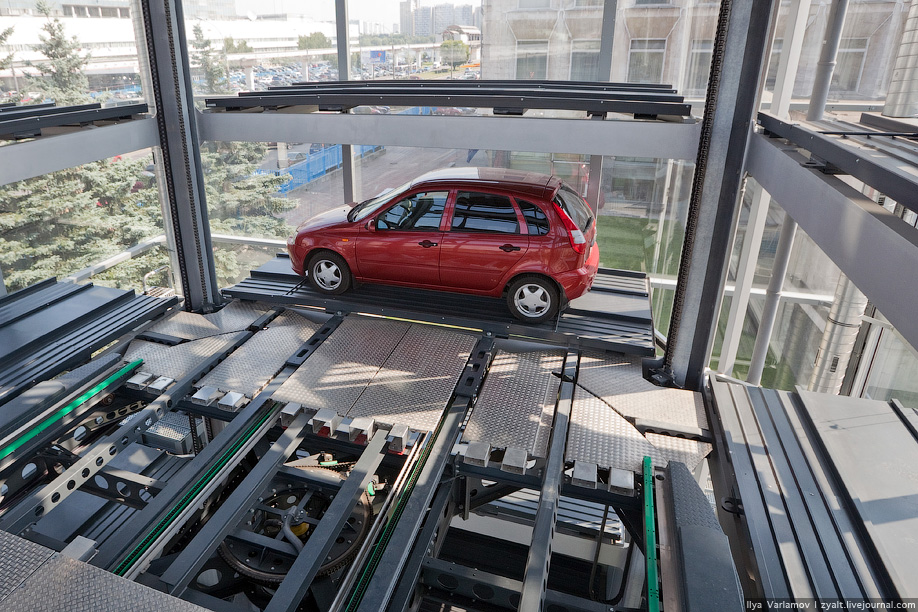 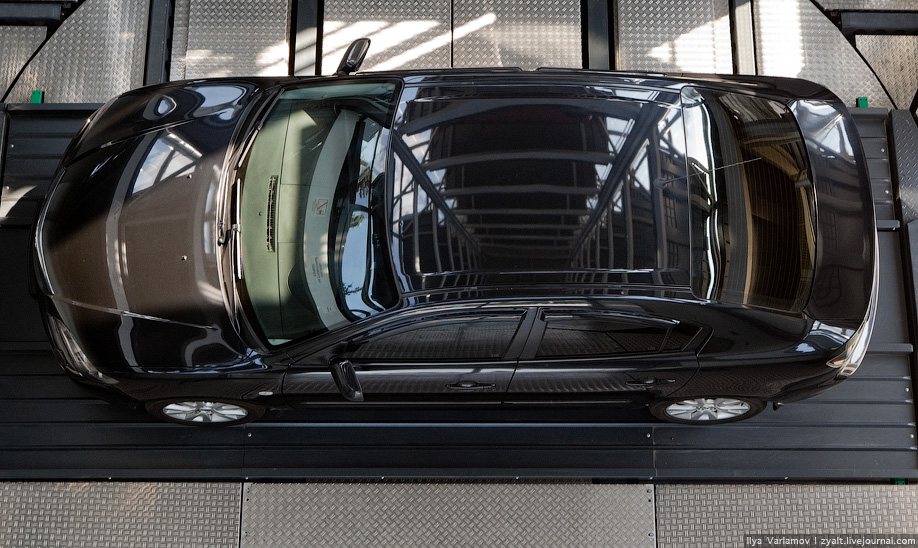 You get in and out the parking lot on the first level. On each of the floors there can be four cars at a time, except for the two lower ones – there can be no more than two autos. And that makes sense as on the first level there are located operator rooms, the automated firefighting system and the switchboard room, which provide safety and other important things. 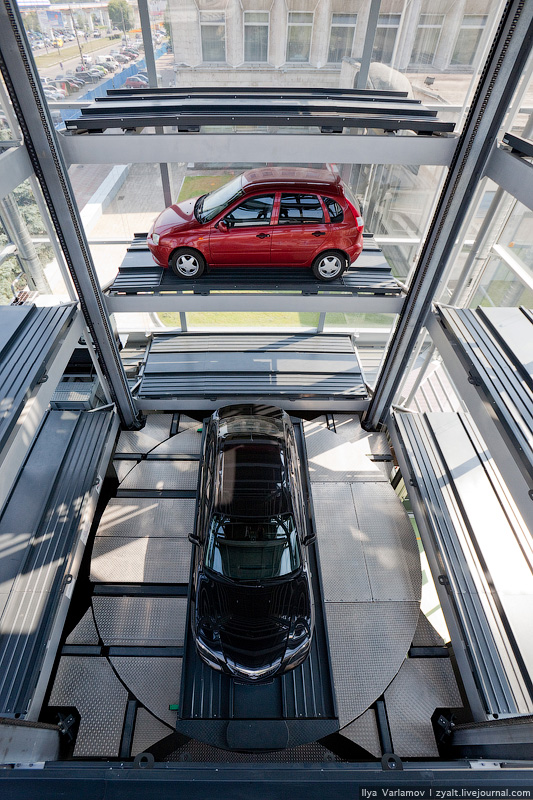 The autos are placed on four sides, and the time for lifting oк lowering a car takes less than 50 seconds. 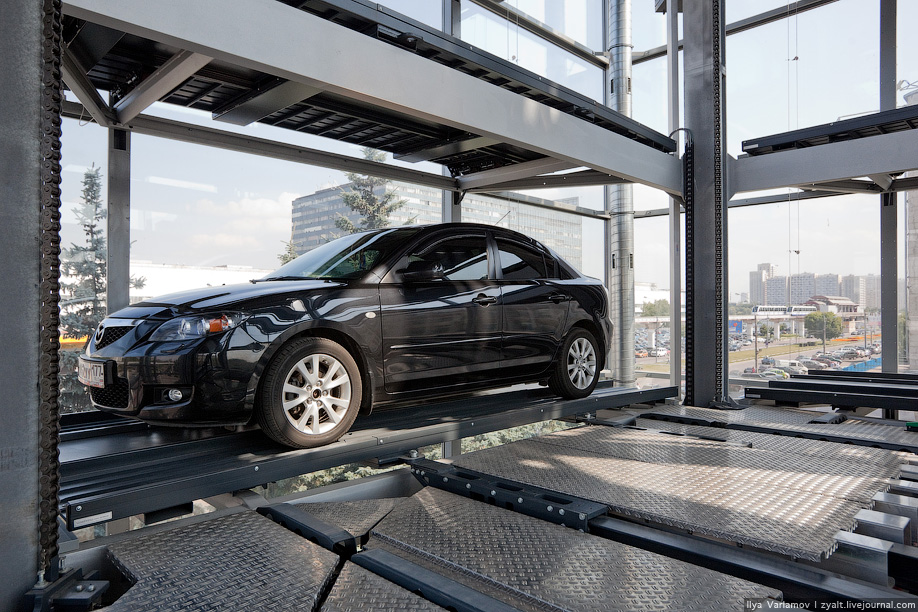 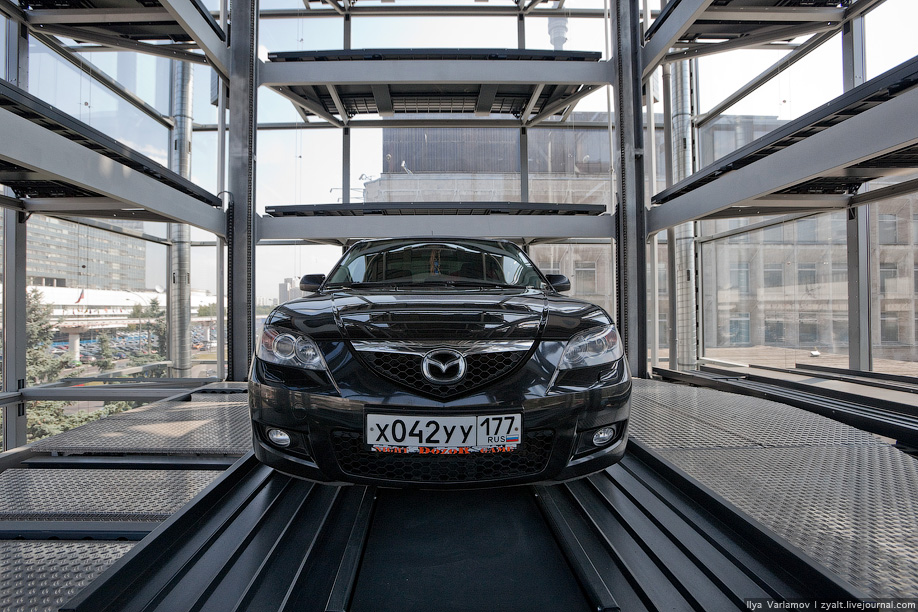 First, the system takes a free pallet, than lowers it and after the driver leaves his car is driven on it, the vehicle rushes high into the air – up to the required level and occupies a free lot. 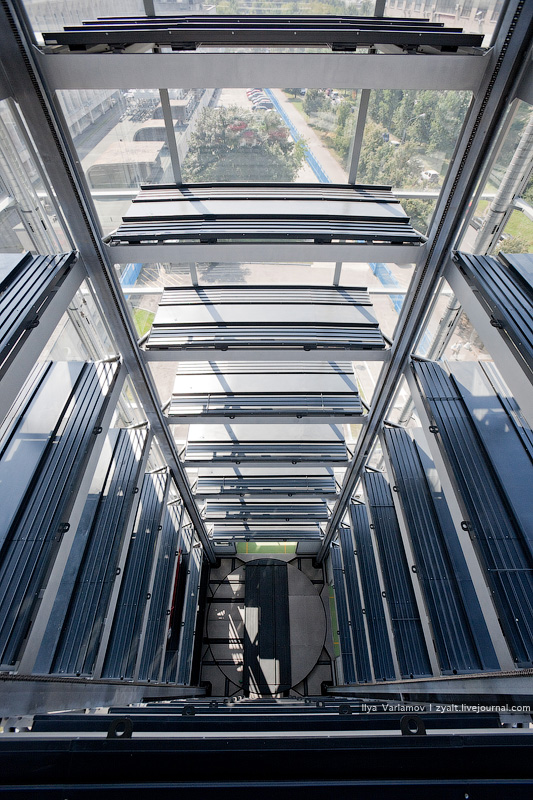 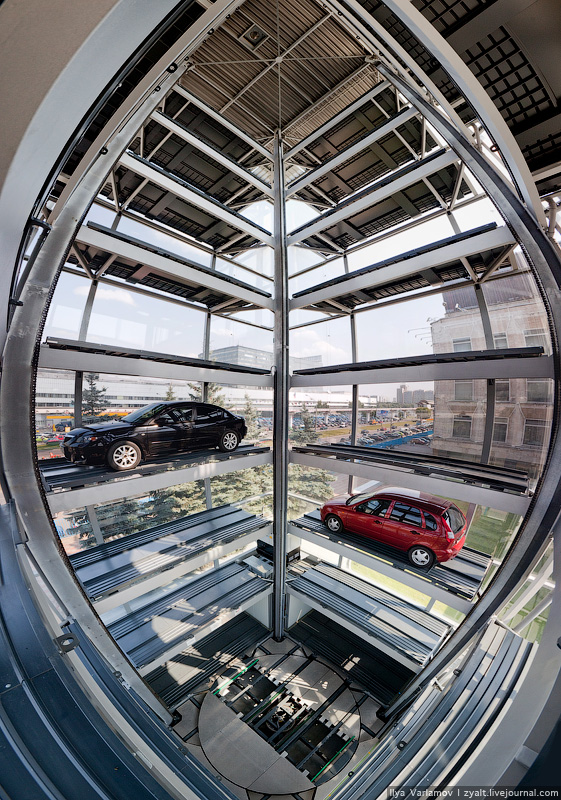 The construction is heated and has a water-supply system. In winder the temperature inside the building is 6C above zero, when the temperature outside is 35C below zero. 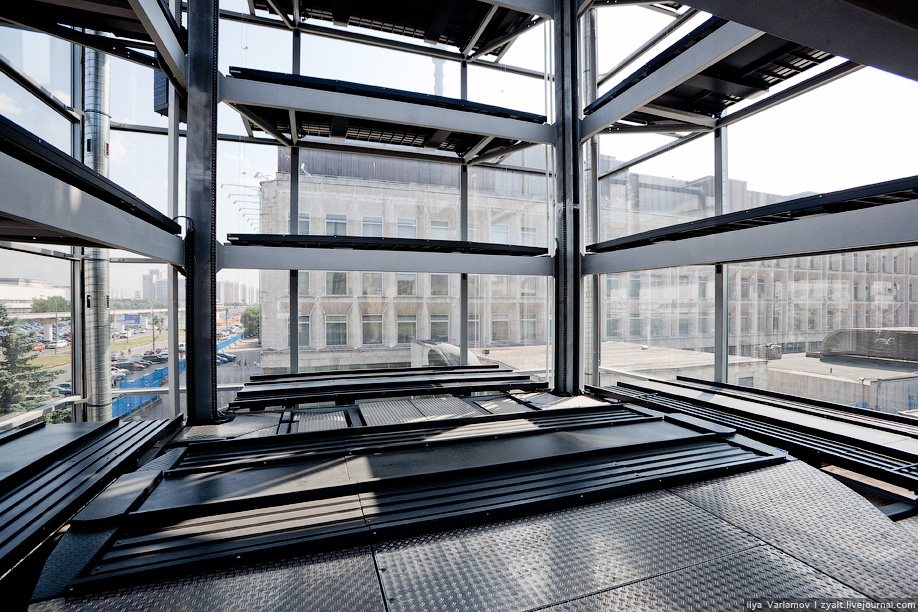 The platform can lift a car weighing up to 2,700 kilos. The first level is for parking off-road vehicles and minivans. On the right there is a diesel generator. In case there will be a power cutoff, it’ll help to discharge the whole parking in 30 minutes. 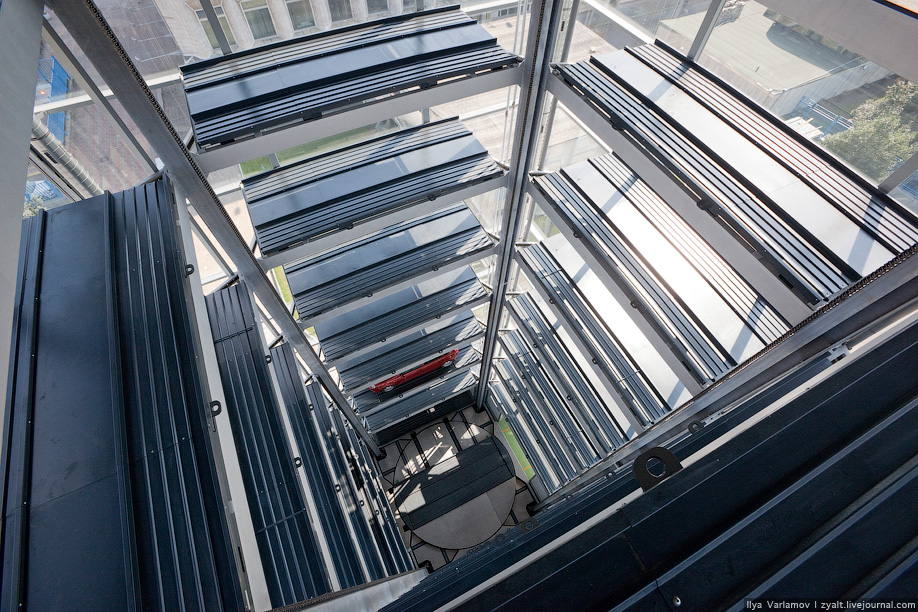 Once the driver pays, he can leave.