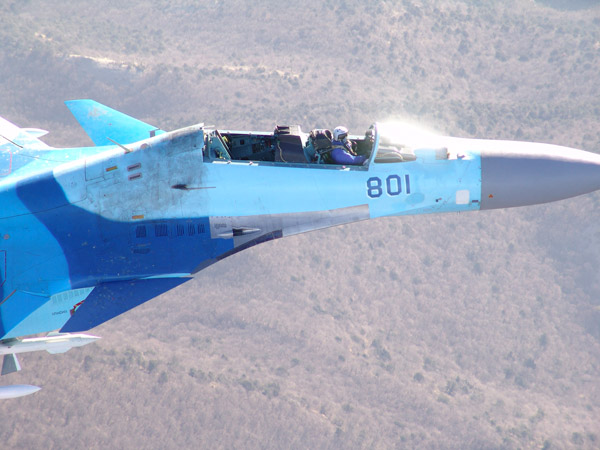 Those photos are real and were made during the filming of the Russian movie involving jet fighter stunts. In one episode they had to film the jet without a canopy, so rather to film it on the ground they decided to hire a high-class pilot to make a real flight without that glass thing. He had to take off a few times on such plane in order to film enough material to be included in the final footage.

“The maximum speed I achieved on the jet plane without a canopy glass was around two times greater than speed of sound. While on this speed I even managed to pull out my fingers in glove for an inch or two outside – it became heated very fast because of immense friction force plane undergoes with the air.“, writes the pilot. “Usually such tests were conducted in winter time, so it was deadly cold without a canopy and I was pretty glad when this heating began, counting minutes before the plane would reach enough speed/velocity so that the air around becomes hot enough. But it wasn’t the main problem for me. In my personal rating of the dangers connected with such tests one of the most bad sides was the extreme roar. Because of this extreme roaring you couldn’t hear the radio so you were flying in deaf mode, you were afraid to pull throttle harder just because going faster was meaning going louder.“, he continues.

On the photo above: Russian military pilot Frolov is getting ready for the flight on the jet cabrio. It is pretty freezing outside, but it would be much colder when he would take off. The plane is being prepared for the no-canopy flight. A cabrio ride above the sea. After the take off. And that’s one more test – the second pilot tests the ejecting system while on the flight with no canopy installed. The first pilot remains in the plane. And now the flight is over.