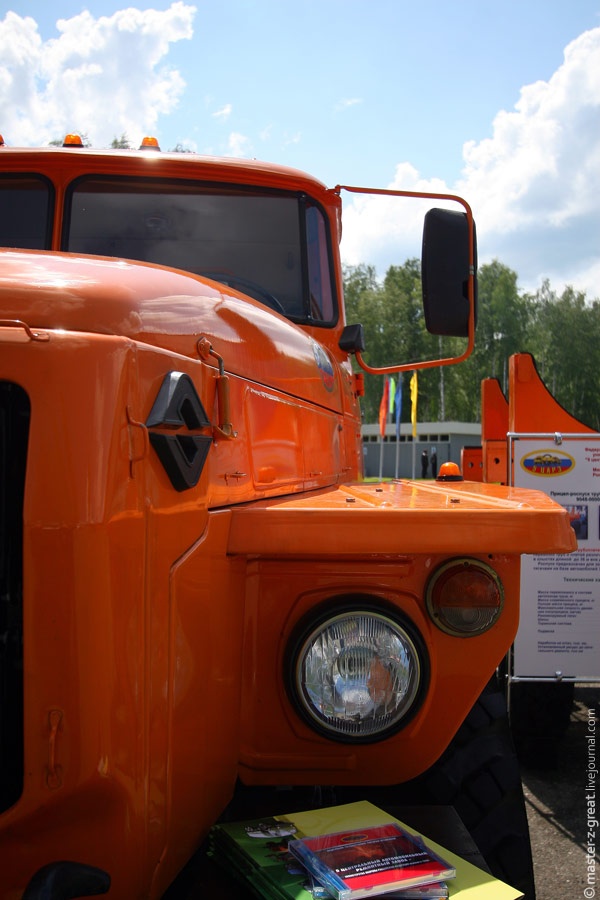 The formal procedure of the Exhibition opening was started with a grand marching of girls wearing hussar costumes. Before the show began any one could look at the displays – the creations of Russian plants were right at the allotted spot, and there one could see not only the weapon of destruction, but totally peaceful tractors and excavators as well. The interesting part is that the most of the technical units in it are similar to those used in war machines.

One of the weapon machines is the Engineer Machine for Obstacle Clearing, it removes blockages and various stuff like hedgehog devices on the way of an armored column. Apart from this kind of obstacles, it very easily gets rid of aggressive ones standing on its way.

The Bridge Construction Tank can build a special bridge for heavy equipment to move along it. The total length of the bridge is a bit more than 18 meters, that won’t do if you are going to force a crossing over a wide river, but still it perfectly works for small rivers and swamps.
The Combat Tank Support Vehicle, a high-powered machine that can aim and shoot at shoot at three object at a time: with a machinegun at people, with rockets at big objects and with large-calibre ack-ack guns at flying objects. Of course, they didn’t demonstrate how most of it shot, because it would be both very expensive and far.

Of course, there were lots of other fabulous things, but watching it is worth many words.

The show was started with all aircrafts were low-flying at an elevation of 200 meters over the tribunes. Those who at least once happened to be at such a show would understand the feeling of a person, who sees a giant machine in just a few dozens of meters above him.

After performing all those barrel rolls, loops and other acrobatic maneuvers, the fighters got ready for debunching, performing various aerobatics operations they got very close to trees and could be seen very well from the tribunes.

A commander of the group sharply flew up above the skies and held it still and then sharply flew down, shooting at the aims.
Of course, at the opening of the exhibition there was a usual gunshot and cutting of the red ceremonial opening ribbon.

After the formal things were over some of the machines demonstrated what they could. At last one of the tanks (it was Т-90) fired a lout shot to keep the spectators active, then two other things (armored artillery weapon and armored tracked chassis) came out to show what they can.

At the very end of the show people were shown the famous trick – a bottle of champagne was attached to one bucket of an excavator, and on the bucket of another excavator there were two glasses, and the driver of the first vehicle was to fill them up with the help of the bucket and dexterity.

The show was finished with demonstrative bombing of the Sukhoi Su-24.
Russia was demonstrating its strength again. If you are still not afraid of all this stuff in the pics, go to the following exhibition and get ready to be full of respect for Russia, at least, while all these giant iron things will be flying above.