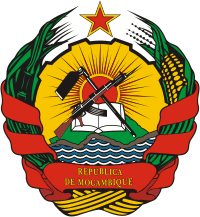 AK-47 is probably one of the most well-known Russian weaponry piece. They say it became so popular worldwide because of it’s high durability (it can go for years without any kind of cleaning or special maintenance) and extreme simplicity – it has only eight moving parts and can be stripped down in one minute.

In some countries of Africa it can be bought as cheap as $12 for one piece and no any license is needed, so even children armed with the guns. Maybe that’s why some of the countries of this continent have the AK-47 depiction on their coats of arms, like Mozambique on pictures above has it both on its flag and coats of arms. Zimbabwe got it too. And Eastern Timor got it live as an official symbol starting 2007. Then the radical Mid Eastern groups are also well known for AK-47 affection. As we can see Hezbollah has it on its flag above. And Osama is known (or was known) for having one or two AK-47s standing somewhere near him during his video appearances.

Those groups are not the only in the modern world who are fond of this epic assault rifle. For example architects of Russia were going to build a AK-47 shaped skyscraper in the home town of its inventor, Mr. Kalashnikov. And by the way, people say he didn’t get any profits upon inventing and introducing this gun just because in Soviet Union authors of such inventions didn’t get any royalties at all. But while the Russians are just planning to built something like this, in Egypt they have already built a giant AK-47 monument on the coast of Sinai peninsula. Sometimes the AK-47 mania gets really crazy and one can get a gold coated rifle:

This particular one was owned by Hussein, not Barak but Saddam.

Or in Afghanistan people put AK-47 on the hand made rugs. And probably the most freakish AK-47 mod is Hello Kitty pink gun:

Also in Russia you can get a silver coin with it: But then sometimes even countries that are far from participating of wars and enjoying peaceful living come up with something as strange as a dollar coin with AK-47 (New Zealand). It goes in a neatly shaped box: And this is Russian basketball star Alexandr Kirillenko known playing for Utah Jazz. No, he doesn’t own hello kitty AK-47, but he is known to be called “AK-47” by his teammates. Then AK-47 is something that is not forgotten by Music industry participants: One can get AK-47 shaped guitar.

Or an MP3 player

And of course, the last but not the least is AK-47 vodka bottles: Of course, made in Russia and can be a must for anyone travel there to take home as a symbolic cool gift from the Motherland.