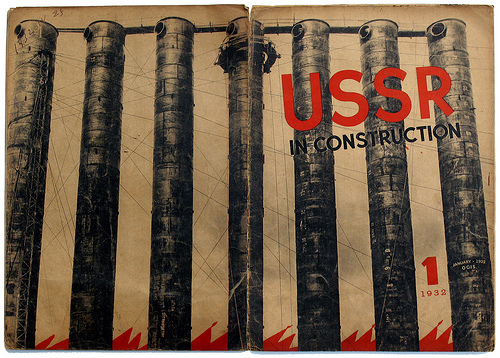 Late 1929. The young Soviet Empire was just getting to its giant feet. Bitterness and tears of the WWI and the Civil War were already behind. The civilized and developed countries were looking at the newly emerged country in a very intent and examining way, trying to predict what this dark horse could come up with on the political map of the half-ruined world.

In Germany National Socialist German Workers’ Party headed by Hitler was growing in leaps and bounds, The Triple Entente’s former allies were keeping their eyes wide open as well.

That was the right time to convince the world that the new country, formed on the basis of torn and suffering Russia, had new heroes and new achievements. 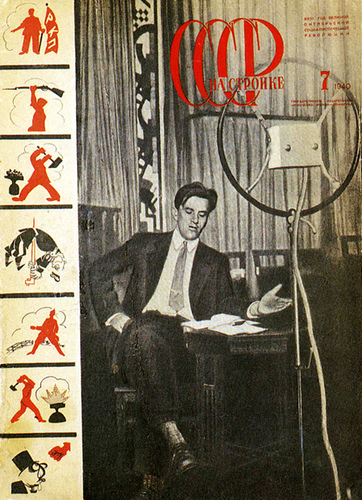 The journal was founded as a supplement to the main journal, but it outgrew its father very quickly and became an independent periodical. Now its issues are considered as a real treasure of modern art, a counter-current of the time and a vivid example of socialist realism.

Ambitious goals of USSR in Construction, the main propaganda journal of the country, demanded for a high-quality artistic approach. The photos and montages were made from images by the Soviet Union’s most prominent photo-journalists. 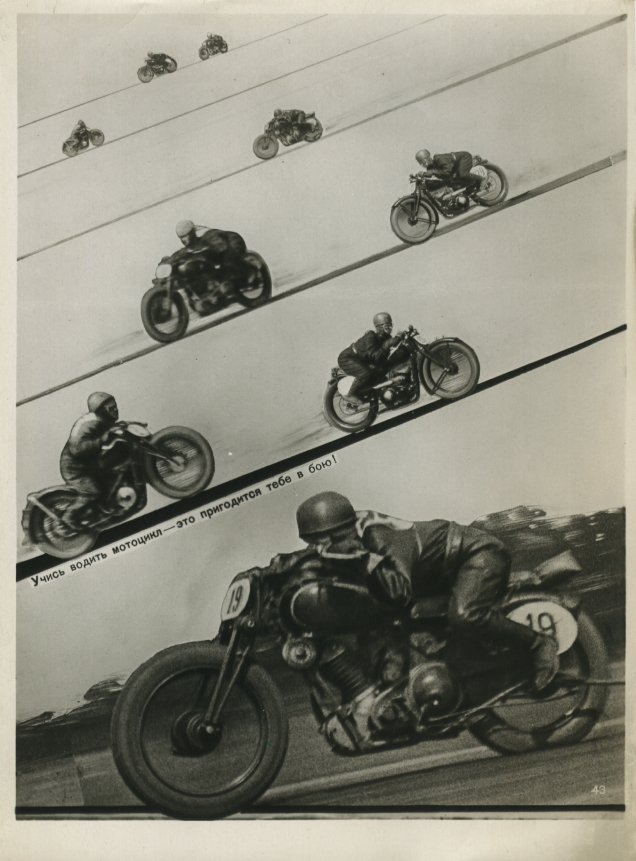 Mindcatching articles were composed by recognized word-men. On the early stages of the journal’s life foreigners were also involved into its creation, including the father of photomontage John Heartfield. For 11 years (1930-1941) the journal was published in five languages — Russian, French, English, German, and Spanish – with the aim to cover the most part of the reading world and show the greatness of the USSR. Of course, common people couldn’t access the issues, as the journal was created primarily for the western left-wing intellectuals and business people. Bernard Shaw, H. G. Wells, John Galsworthy, and Romen Rolland were among its subscribers. The journal kept readers abroad informed of the all large-scale constructions taking place within the USSR. 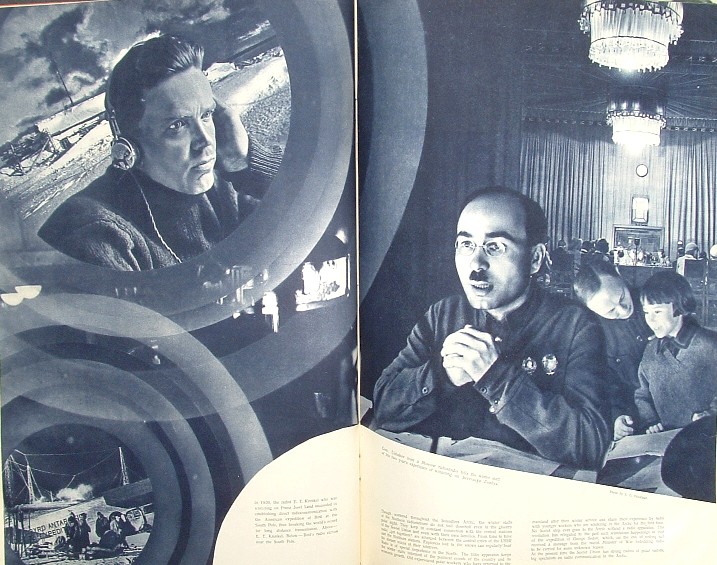 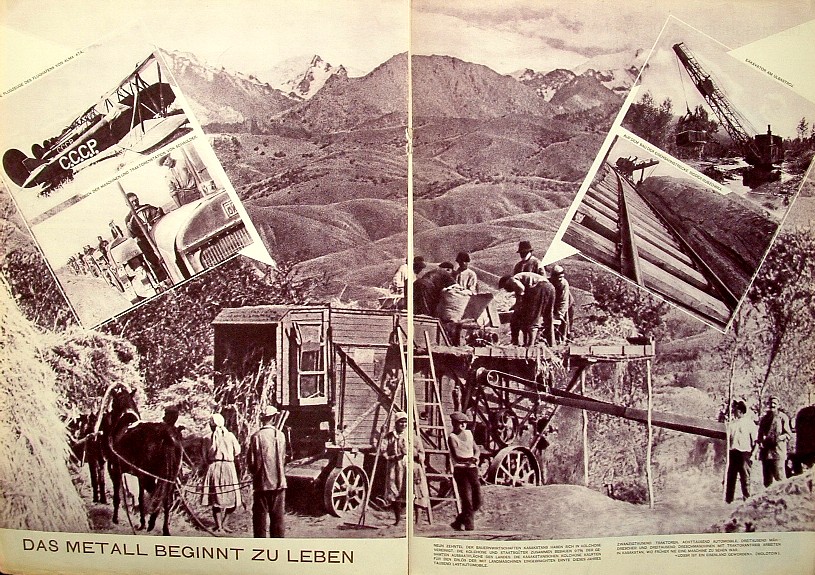 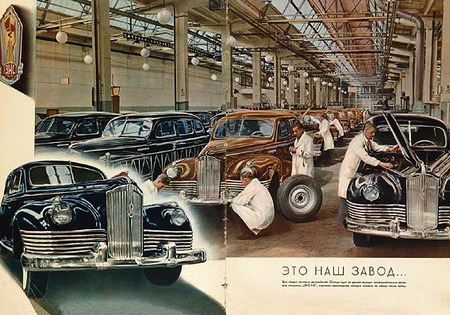 Gradually the party elite became the main readers of the journal and turned to be a kind of an annual progress report, though, a very reach one. 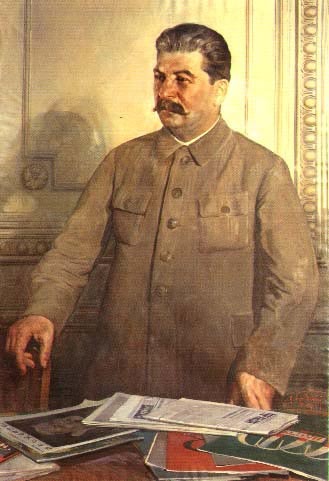 The size of the journal was really huge for that time. Oversized pages (almost A-3 format) and multi-page fold-outs on a high-quality printing paper were totally new for the readers of the USSR and other countries. For special occasions the creators of the journal used to present really exclusive issues. For example, one of them, devoted to the 17th Congress of the Communist Party, was wrapped into the pieces of cloth of balloon “USSR”, which reached record 60695 feet. A gramophone record with stories about the experiments went with the issue. Please, note, that it was 75 years ago, in 1934. The issues devoted to the Maxim Gorky aircraft (the Tupolev ANT-20) were in the aluminium (!!!) cover. And in other issues of 1936, which was devoted to Georgia, the pictures were partly printed with gold leaf (!!!). With this, the text was just to support the pictures, used to be short and went mainly in the propaganda style. 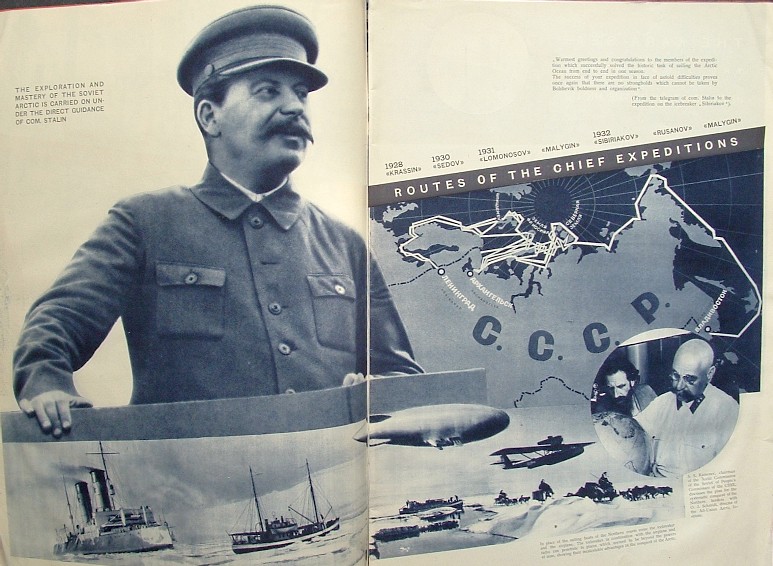 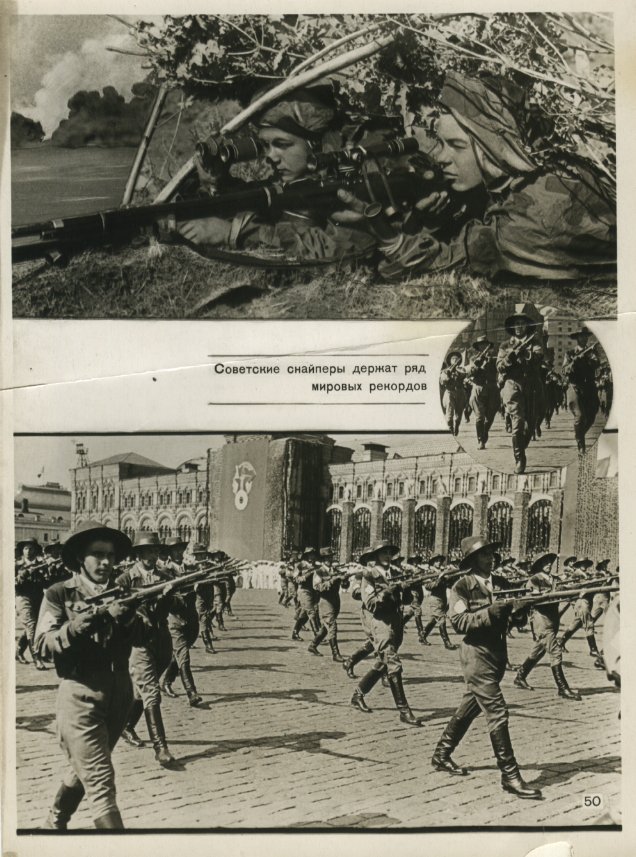 For that period USSR in Construction was the most avant-garde in terms of time and style and obviously ahead of its epoch. In many ways it could have been a real competitor of more recent publications, though, it didn’t manage to cope with changes in the domestic policy. The Great Patriotic War marked the end of the journal’s life, and all the attempts to revive it in 1949 weren’t fruitful. New era, new views.

26 thoughts on “The greatest propaganda journal of the USSR”