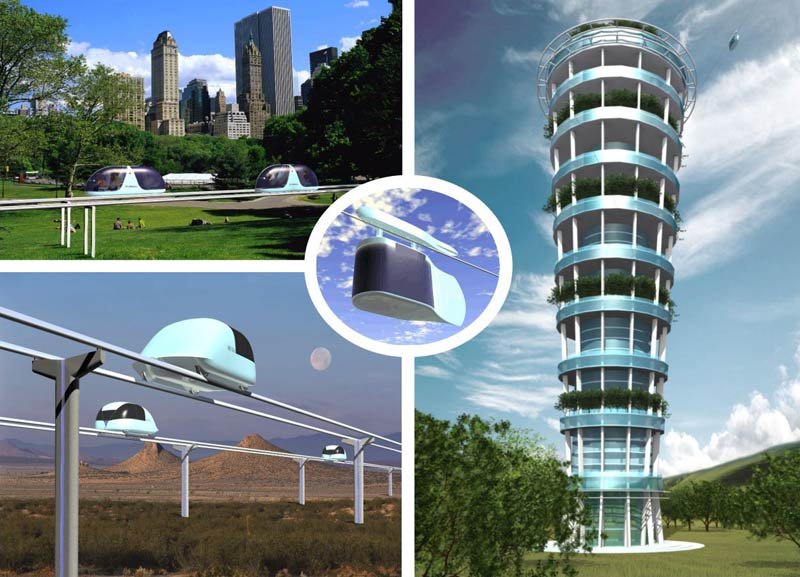 To continue the transportation theme for today, as we had the new trains, now something that was planned to be built 30 years ago, back in 1970s. It was called the “super string transportation system” and was claimed to come to replace the existing rail road technologies.

The steel cords under great tension had to be stretched on the polls across all the country to support the high speed (up to 500 km/h – 300 mph) trains movement.

The project was pretty fast approved by Soviet government because of its cheap cost if compared to conventional rail roads – no need to prepare Earth surface – just put some polls and you are ready to go. As always, it started with just sketches on paper, made in the manner it looked to be contemporary in 1970s. They planned eventually to make them look more cool, but to test first principles of this new mean of transportation just regular cars were rebuilt in order to fit those string rails. The idea of such “hanging rails” was not new at that times. First mentionings were found back in 1893 in old Russian newspaper telling its readers about the benefits of “new futuristic way of transporting people and goods”. They called it “wired train” at that times. Then later they even devoted the cover photo to such technology in “Popular Science” magazine in America. The bus on it looks like suspended by the wires but take a look on the wheels, looks like they wanted to use it as going on the surface of the wires too.

Still, before 1970s nobody has built any really big projects involving those “string” or “wired” rails, until they have decided to plan and build such kind of system near Moscow.

What is left from it nowadays we can see on this photo set below. It’s hardly can be understood now, looking at this abandoned parts of large metal structures what for it was used before. Still, if you give a closer look you’ll see those thick metal cords that was the main element of the technology. The project got abandoned and was left to rust. People had many more important things to do, so this one was left alone there, partly disassembled by locals and in part still staying as a symbol of frustrated ideas of man. Still, the idea of getting it up and working was not leaving the author, who carried it all through all the thirty years of government regime change in Russia and then years of chaos afterwards. He turned first to the Western corporations offering his ideas for optimizing traffic in large cities. But the only countries that really got interest to the development of such transportation system, were Arab Emirates.

Still after long negotiations it was left on paper and not implemented. So he got back to “Motherland” in search of support.

And some time ago they have built the working model that you can see on video:

This text will be replaced

It’s still not clear would it go to mass production or would still be just limited to one working example.

25 thoughts on “The Story of the String Train”