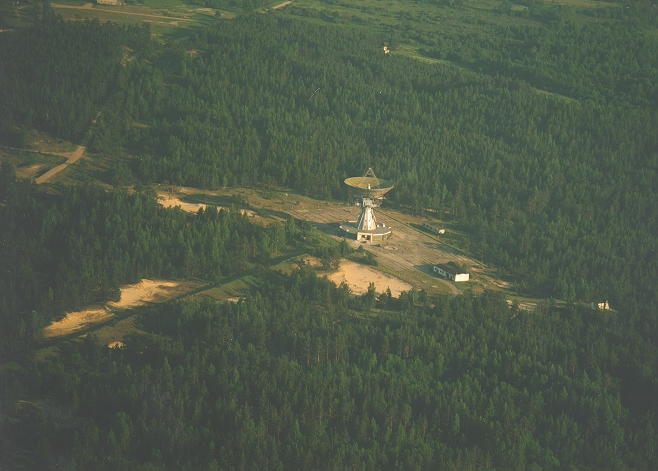 Somewhere between Ventspils and Kolka cape in Latvia (ex-Soviet country) is located two radio telescopes (also known as “zvjozdachka” – the star), that in those days were one of most secret elements in soviet army. There are two antennas left – RT-32 (main dish is 32 meters in diameter) and RT-16 (16 meters). The smallest one – RT-10 – was taken away when soviet soldiers left Latvia in 90-ies. With those antennas Russian forces were able to spy phone calls everywhere they wanted. When entering the complex (area – 200 ha), first you can see abondend city where soviet army forces and scientists used to live. All of that was so secret that even Latvian soldiers and scientists were shocked when they saw what has been here all the time (in fact, all Northern and costal part of Kurzeme was strictly no inhabitants zone). Back in 1993, when Soviet forces were preparing to leave Latvia, they wanted to blow up all those buildings (what can’t be their, can’t be anybody’s). Although, because of last minute call from Russian Academy of Sciences and international astronomers, they just demolished them – Latvia’s scientists received RT-32 and RT-16 with nails hammered into wires, with acid poured on main system parts and with no plans how to start up this equipment. Interessting, that all damage was made after plan – believing that Soviets will come back someday. In less than 20 years Latvians managed to repair all this and replace all the equipment with modern PC so that foreign scientists can come and work. But it has a downside – now tourists aren’t allowed to go inside there. Nowadays RT-32 is used for science. Because of it’s precision (it’s one of most precise radio telescopes in world), it can be used to listen signals from space. The most furthern constellation that was received was Swan’s constellation – 500 million light years away. The RT-16 is being renovated and it will be used for young scientists from Ventspils University that will monitor their sattelite that they are preparing to put into space. Back in soviet times all three antennas were connected with underground paths. Nowadays there are not in use but they still are there. Tourists are not allowed to view them.