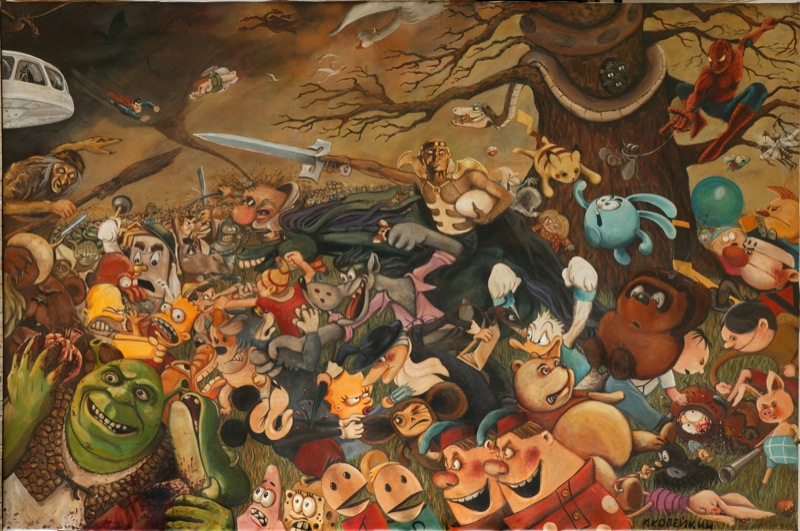 Some short stories and curiousities that are too short for a separate post. First photo is a small size version of the epic drawing made by some Russian guy depicting truely epic fight between Hollywood heroes against Russian cartoon and cinema characters. By the click you can zoom it on and see in detail who is winning. Barbeque is possible even when you live at multi stored building in Russia. This smiling grandpa looks in the company that serves and sells elevators. Looks like he had made some cool doors to attract more attention to his business. It can really decieving from distance. This guy is fond of making photos of balanced eggs. He says no photoshop or glue was used, everything is set by hand and takes from a few seconds to a few minutes to balance the eggs. They call this car “Pokemon Mod”. I am not sure it’s reminding one, but looks bit creepy from inside. That’s a nice shot, was made in Russian countryside on one rainy day, People say that’s how the higher ones express their attitude towards the work of the holy church. It’s not clear have they hit the church building with a lightning as a sign of anticipation or of total indignation. One Russian economics review newspaper has published those suggestive charts as illustration to their front page article. They were not left unnoticed, even by just common folks. It’s not easy to be a football star in Russia. Even if you have a nice car it can be burned down by some fans as revenge for a lost game. That’s not the first time such things happen, on the photo you can see Russian football player and his Mercedes, before and after.

Then some drivers in Russia express total disrespect to the registration plates they have on cars. Sometimes they just turn them up-side-down, because they explain: “There is no such a point in the law stating we must to have them not up-side-down, there is just said – have the plates on your car in the manner it can be easily seen.”. Others just use double plates, one is real another is a part of graffiti made on the car. Why so obsessed with graffiti people asked after the last “Car Graffiti” post? The reason is sometimes very simple, people say that the cars with such artwork are not being stolen in Russia, so ordering such art design on your car is almost like buying expensive car security system.

And also we have today some music, just a few seconds of Russian politic, actually the governor of some of the Russian regions. Seems like he is having real fun on the public meetings:

Ok, that’s it for today, see you back later!

22 thoughts on “The Balancing Eggs and Unbalanced Fans”