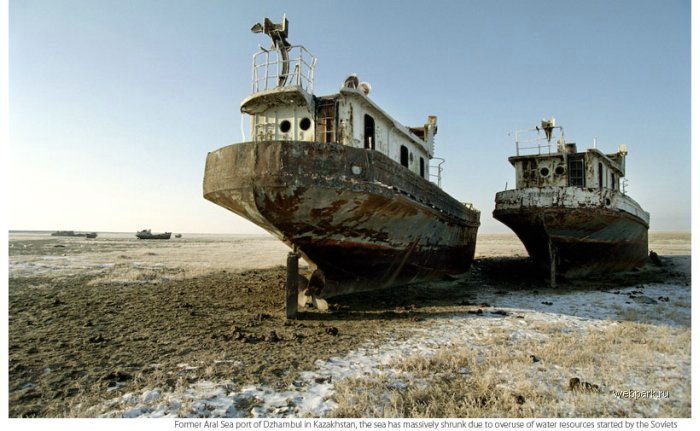 The Aral Sea was once one of the largest seas of the continent. It was fed up by two powerful rivers that were later turned away by the decision of Soviet authorities. They started using water of those rivers for agriculture and just look how it dramatically changed the look of the sea, which is now a mere puddle. The black contour shows the original size of the sea before it was deprived of its rivers. The green is how much water there was left a few years ago. The water has too high concentration of salt to support any fish life. And that’s how it looks like now. Just a little bit more effort of the Sun and nothing more water would be left. Just imagine this was before a sea bottom, with thousand feet tall water level above and pretty sea life. Now you can come there on the car. To understand the scale of those cliffs that were under water once you can check the three dark small spots at the right bottom corner of the photo. Those are the lost cows. People tell the story that they meet them from time to time there but have no idea how they manage to survive in this no-green desert. Previously there was fishing industry around, later thousands of fishermen were left without jobs and had to relocate.

some photos via Pavel Kosenko