Today we have a series of very nice piece of architecture staying abandoned for quite a lot already. It is from Abkhazia region, the place that was under Russian rule long before communists came to power. It’s located on the Black Sea and was so beloved by old Russian upper class that they called it “Russian Riviera”. This place has probably the most picturesque abandons from ex Soviet places. We had once the old abandoned railway station from there, if you don’t remember take look here it was very nice looking series too. Today some shots of the abandoned Prince’s House, built almost two centuries ago by special Royal order. That’s how it looked when prince got it.

It was not very long the prince could enjoy it, the communists took over and nationalized most of the luxury property in Russia. During Soviet Era the house was turned in elite summer residence for Moscow higher up men. That’s how the placed look when it was conversed to the Hotel “Seagull” by the personal order of J. Stalin 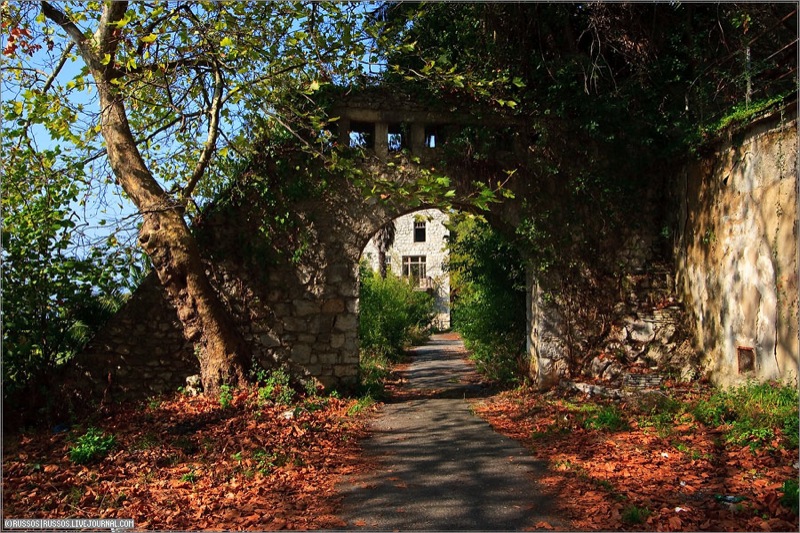 The house had a cool sea view. And nice round windows. It stays abandoned for already more than 20 years. What happened is that when Soviet Union collapsed and every state asked for “as many independence as they could carry with themselves” this part of Soviet state was left to Georgia, and the war began, now between parts of Georgia to become independent. During the war many of the villages and towns were abandoned and nice buildings were ruined. Just look how tall this tree should be to grow from the ground floor up all the way thru the chimney. And this looks like the prince’s office. Good office he had. And here is another nice looking and totally abandoned building just near. Local authorities don’t hurry to reconstruct all this. There is no need for them to do this and they can’t make any practical use of those – like it’s to far away to make a casino here. Here prince probably spent his evenings with a cigar and some wine and a book, overlooking the sunset on the see. Later some ugly wooden huts were built around, probably in Soviet times they used those to store some household stuff. Lately a new wave of interest for this places appeared among Moscow riches. The only reason they are not here yet is probably the political unstability around, and the price for tickets to Nice is much cheaper.