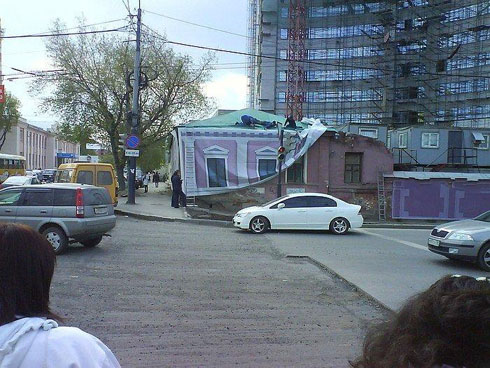 If you want to give your city new cool renovated look and don’t want to spend much you can take the tip from Yekaterinburg city officials who have ordered cool looking canvases and just put them on top of the houses where people live so that their city could look more attractive in summer. This place looks like it has a blooming garden inside. But what is there is… And now shots from another place. It looks neat and tidy, with modern renovated gates and flags and old Lenin buddy on the wall with “Lenin lived, Lenin lives, Lenin would live” saying below its portrait. But what’s inside? Looks like the roof is not here any more, in winter. …and even next summer it doesn’t come back too.