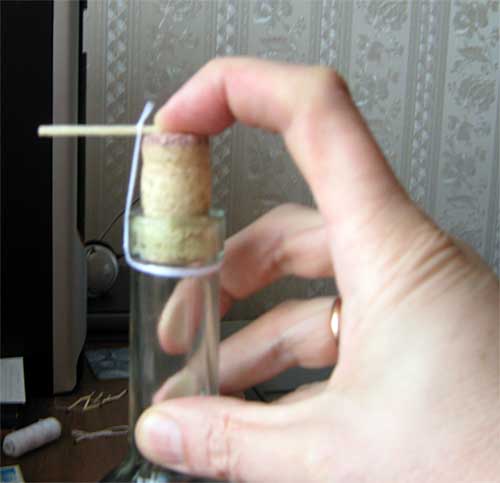 With those cool Russian balance tricks you can entertain yourself or your friends at some party.

For the first trick you will need a glass bottle, a cork, a piece of thread and a matchstick.

With a thread one can tightly tie the upper part of bottle neck then put the end of the matchstick horizontally on the cork and then holding the matchstick with a finger the thread ends should be tied above the matchstick. …hang even if the bottle is heavy and half filled just on one matchstick. And here is the another trick: The end of the half-opened jackknife sticked in the matchstick, knife handle down, then the match can be placed on the fingertip or at the table edge or even at the edge of the glass – the match would be stayed perfectly balanced. The effect can be doubled if to put two of such matchstick-jackknife thingies one on each other. The end of the matchstick is sticked into the cork. Then you stick the fork and the knife in two sides of the cork, as on the picture. The you can put this system at any surface and it would stay balanced.

It’s important for the fork and knife to be of around equal weight. Even if you put it on the narrow edge of the wine glass.

It’s hard to believe that’s possible before trying it by yourself!