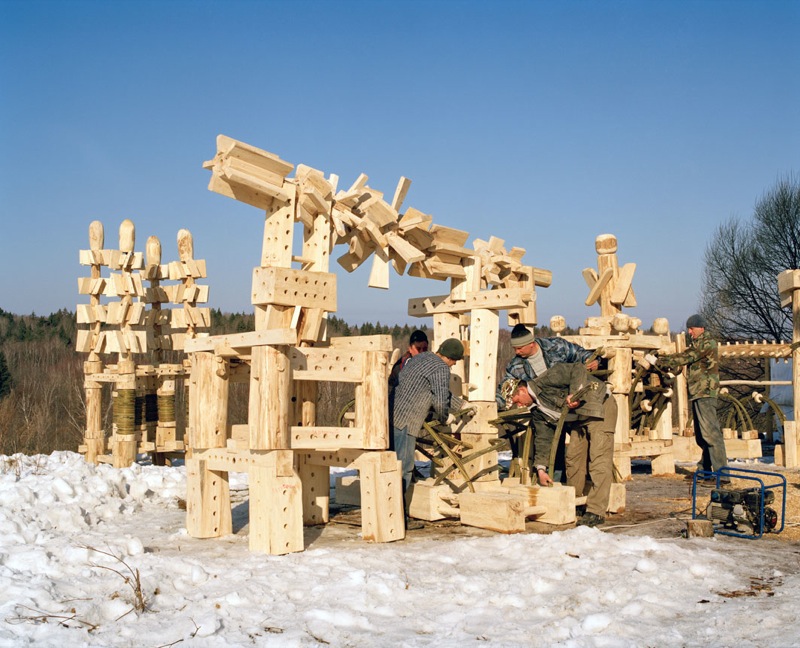 When the rest of the world waits, holding its breath, for the start of the large hadron collider in Europe, those Russian people decided not to wait, but to built a prototype of the collider by themselves. As for the choice of the material there was not a big choice, they decided to follow local traditions and make it out of wood, why not? As well, as its larger brother, Russian Wooden Collider is not finnished yet. The main thing is to connect wires correctly, in order not to miss that Higgs particle. Russian wooden collider is much greener, than its Western pal. As you can see on this image it uses wide range of renewable technologies, such as self-powered wooden wind powe generators, and the wood itself is not toxic and can be used even by kids and people with wide range of allergies, except of the sawdust allergy affectees. This project is a collaborated effort by Moscow initiators and countryside locals, all joined by one great purpose and team spirit. And it all has started just with few sketches. And then, before getting the whole concept to its field testing it was carefully tasted in indoors labs, as any scientific object should be nowadays. “This project is a big leap forward in using renewable materials in particle physics. Just imagine no need for the shielding against dangerous Alpha- Beta- rays, no need for high voltages and pollution of the environment caused by all the plastics and metal parts production. Literary, anyone can go and build his collider from the saw wood, which is widely available across the country. And if you ask me if it is not dangerous, that anyone can build such hi-tech device in his back yard, I tell you we have nothing to fair. All those rumours about the possibility of opening black hole portal to forth dimension when the particles collide is bull, especially it’s not worth any speculation in our case, when the wood is used – it won’t contradict the nature itself, and nature as you know, is a great power”, tells the Wooden Physics expert. via In the list below you can see some more previously mentioned products made of wood in Russia: