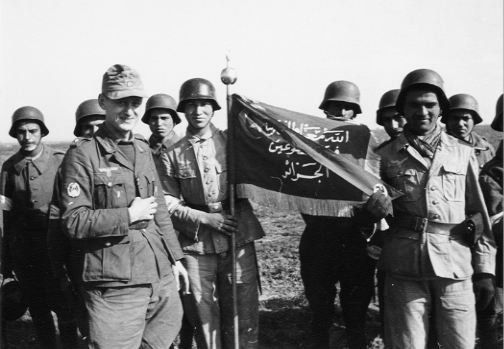 There are young people who sympathize nazis in Russia, like in many other countries. They don’t tolerate anyone not belonging to the white race, wear big boots and short haircuts and usually celebrate Hitler’s birthday. Stop, it seems here they are failing, as was proved by some Russian anti-nazi blog post.

Russian guy collected the various photos from the WW2 where and showed that Nazi troops have consisted from those who modern nazi lovers have to hate, so preaching Hitler should be totally illogical in their case.

So now Russian internet nazis seems to stuck in dilemma – can Hitler be their idol or not?

Below, one can find that compilation. Hitler was in good relations with Arabian leaders. Indians served for Hitler too. As well as Georgians and Azerbaijanis. We all know Japanese did. And so the Koreans did. Then various people of Far East.

And there were even Nazi African troops: But that’s not all. There were Jewish people who served for Nazis, wearing nazi uniforms and swastikas. They served in special “Jewish Police” that helped Nazi command to control the jewish ghettos, and later they were even used to guard concentration camps: So the moral here could be, that we are all one world, and the smart people who governed us in past did understand this much better than regular average people towards whom all this nazi shit propaganda was oriented – simply Hitler itself didn’t followed his doctrine and used different nations for his military needs. So, hopefully, nowadays people are wiser and won’t fall in to the trap of general terms, rather judging person by himself rather to what race or political party he belongs.