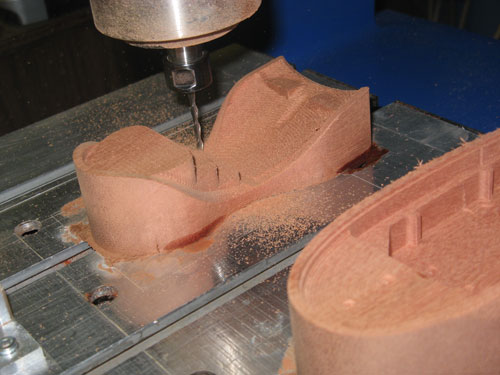 These days when people going to be more green such devices gain popularity. Russian author of wooden mice writes: “Wood, as the cover material for everyday appliances is almost not used nowadays. Plastics are cheaper, easier to produce, faster – they suit well for mass production. Real wood is still can be found from exclusive furniture producers (regular furniture is made from plywood or laminated sheets). Saw wood industry is also mainly oriented for the construction works, thus the wooden material is available on market is of worse quality. Technologies of producing beautiful things from wood suffered greatly. They are almost, not almost, just forgotten. Just some time ago people could make from wood the things that look like a miracle for a modern person. For example those Russian wooden clocks of the 19th century:” Such Russian clocks were produced by the Bronnikov family from Russia. For three generations they mastered their skills on crafting light-weight fully functional wooden pocket clocks. Such gadgets were true hit back then, among their customers there were Russian Tzars and other high society members. They were sending their samples to the international exhibitions of Paris and New York to make foreign people awe. The price of such wooden clocks exceeded of those of gold. Not many of those survived Russian revolution and communist reign. Those who did are a rare guest of antique shops priced at around $20,000 for each. Of course, in 21st century, Russian people don’t use hand knives to carve the computer accessory. This is being done by a high-precision computer controlled machinery. Though some think, the product can loose its hand-made feel because of that, the production speed still is a key factor nowadays which prevails on other arguments

The footage shows how it is actually being carved from a solid wood block. And that’s the parts that have been already finalized and ready for assembly. So, the wooden mice is one of the examples of this forgotten wooden craftmanships coming back to life. This are a few photos from the process of making those. “The best thing about the wood that it is 100% compatible with the human”, is the main ideology of such projects. The wooden bodies are made of different finewoods. Those on above are (left to right) from: ebony (Diospyros celebia), sapele (Entandophragma cylindricum) and merbau (Intsia palembanica) Some other modern things in Russia where the wood is tried to be use as a substitute for the modern materials, previously covered by English Russia: