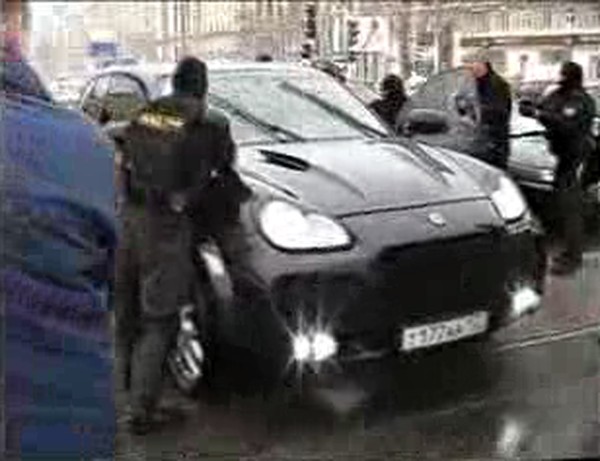 This is the most viral video of yesterday from Russian Internet. Here is the quote from the original Russian post about this video, made by author: “Those Aizerbajanians (in the second Porsche Cayenne) has robbed the bank and killed one, wounded another bank worker and he has probably died later, this was in the news. They weren’t caught at that time, but here comes the information that those bandits are going to the centre of Moscow on the black Porsche Cayenne with the plates number 177-177 on the Lenin Ave. The Moscow police special forces went there same moment and prepared to infiltrate them. First they got the report from the previous intersection that Cayenne has passed by – so you guys prepare to meet them. They stop the car, break the windows, throw light grenades inside the car but then notice that instead of the gang of Southerners there are only two Slavic dudes. Which, as they explained later, were going to Moscow downtown for the lunch. While police were processing those first guys they got a message by radio that another black Cayenne with 177 plates has passed by. As you see the second one was correct. They had the same numbers on the plates but different letters. The Police has payed for the repair works for the first car, don’t worry. The police acted so violently just because those were real organized criminals and because they have killed bank people, and because they were not lying down as asked, and because… well there were many reasons for this. Take a note that they hadn’t beated the guys from the first car, and those from the second who acted as were asked too. According to the rules they need 5 people to intercept the car: first is breaking windshield with a hammer, others break the side windows and throw the light grenades inside. They shot the wheels because the car’s gear selector was not at “P” position and was continue moving. Just to sum it up: they were catching not those who steal something small from the pockets and that’s why acted like this”.

The video itself is below, guys from the first car got really in the bad place in the bad time: