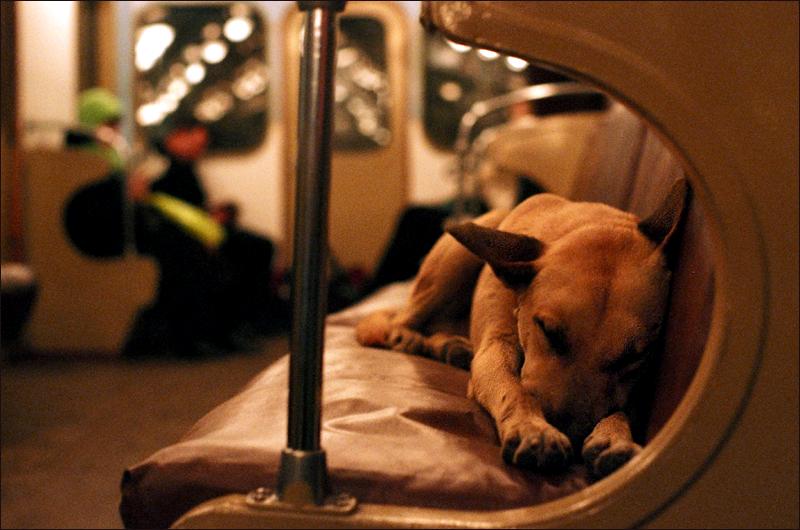 Russian scientists say that Moscow stray dogs became much smarter. The four legged oldest human’s friends demonstrate real smartness such as riding the Moscow metro every morning to get from their suburban places of living to the fat regions of Moscow center. Once they arrive to the downtown they demonstrate different new, previously unseen for the dog skills. Those skills can include “the hunt for shawarma” for example, the popular among Muscovites eastern cuisine dish. This hunt scene can be seen as this:

Regular Moscow busy street with some small food kiosks. A middle-aged man buys himself a piece of hot fast food and walks aside chewing it without a rush. Then just in a second he jumps up frightened – some doggy has sneaked up on him and barked out loudly. His tasty snack falls out from his hands down to the ground and the dog gets it. Just ten minutes later, on the same place, the teen youngster loses his dinner in exactly the same manner. The modern Russian dogs are on their urban hunt. 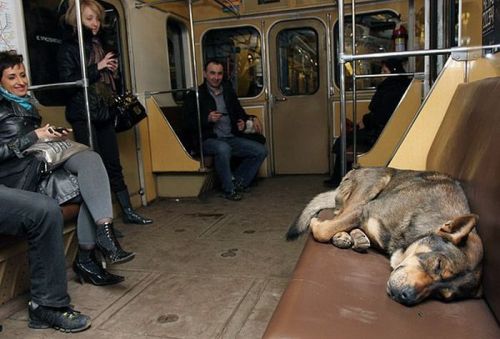 “This method of ambushing people from their back is widely exercised by Moscow dogs”, saying A. Poiarkov, working in Ecology and Evolution Institute of Moscow. “The main point here is to define who would drop the food scared and who won’t, but the dogs are great psychologists they can do it better than us”.

Moscow ecologists think that dogs started acquiring this habits in 1990s, when the Soviet union collapsed and Moscow has fell into the hands of new class of Russian capitalists. They understood the true value of the downtown realty underestimated by previous Communist owners and became removing all the industrial complexes Moscow had in its centre to its outskirts. Those places were used by homeless dogs as a shelter often, so the dogs had to move together with their houses, so they had to learn how to travel Moscow subway – first to get to the centre in the morning then back home in the evening, just as us people.

“Sometimes dogs are doing mistakes adapting in metro, but they are studying.”

The commercial revolution of Moscow made their usual feeding places like trash bins out of direct reach, so they had to get to know new ways of getting their piece of food. That’s how appeared those “Shawarma hunts”. Sometimes though they use more gentle methods. Young girl sits on the bench to eat her hot dog – a big cute looking dog appears from the surrounding bushes and puts her head on her knees. The girl can’t help herself sharing the hotdog with a dog.

Among some more amazing skill those Moscow dogs are the ability not to miss their stop while going on the subway train. Biologists say dogs have very nice sense of time which helps them not to miss their destination. Another skill they have is to cross the road on the green traffic light. “They don’t react on color, but on the picture they see on the traffic light”, Moscow scientist tells. Also they choose often the last or the first metro car – those are less crowded usually.

It’s funny but the ecologists studying Moscow stray dogs also tell the dogs don’t miss a chance to get some play while on their travel in the subway. They are fond of jumping in the train just seconds before the doors shut closed risking their tails be jammed. “They do it for fun, just they have enough food”, they conclude. 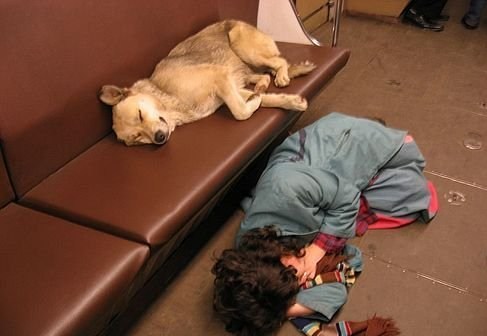 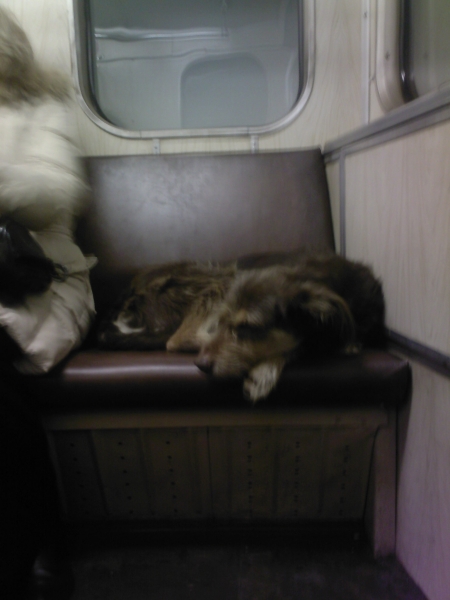 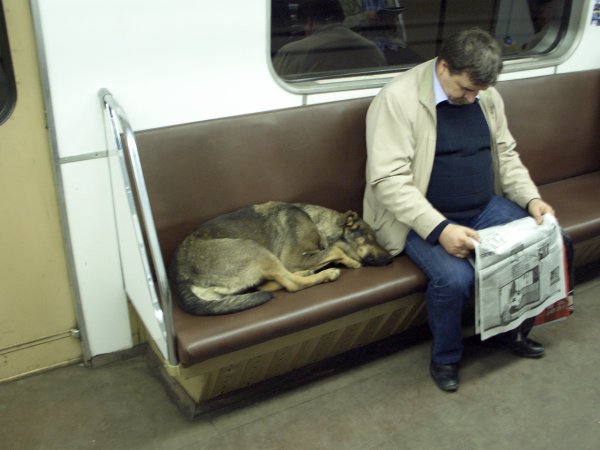 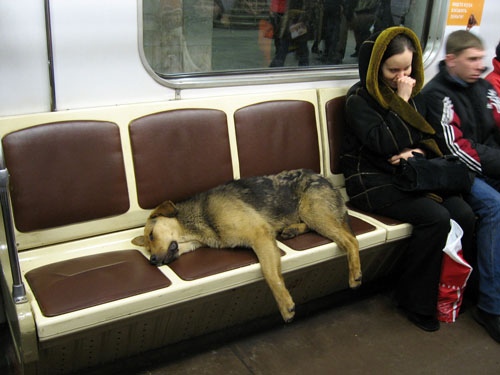 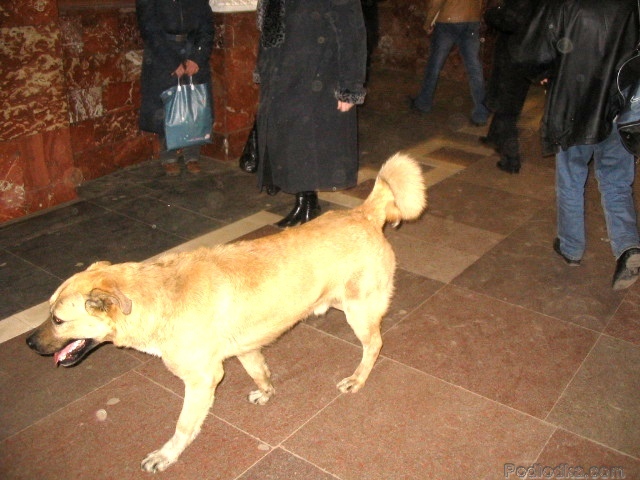 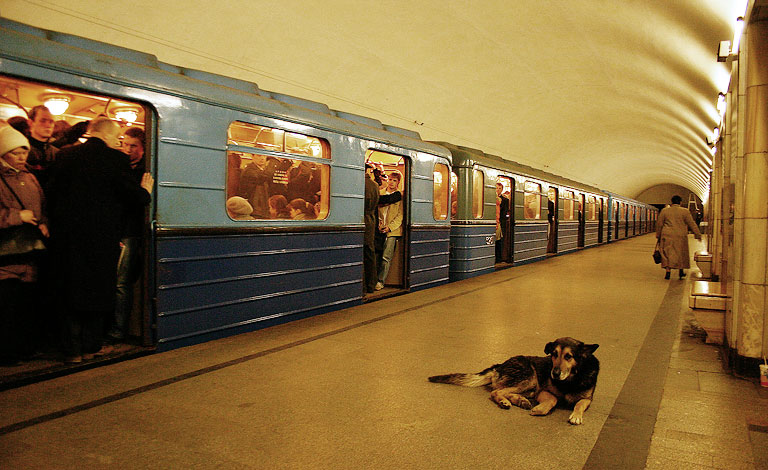 “Waiting for the right train” 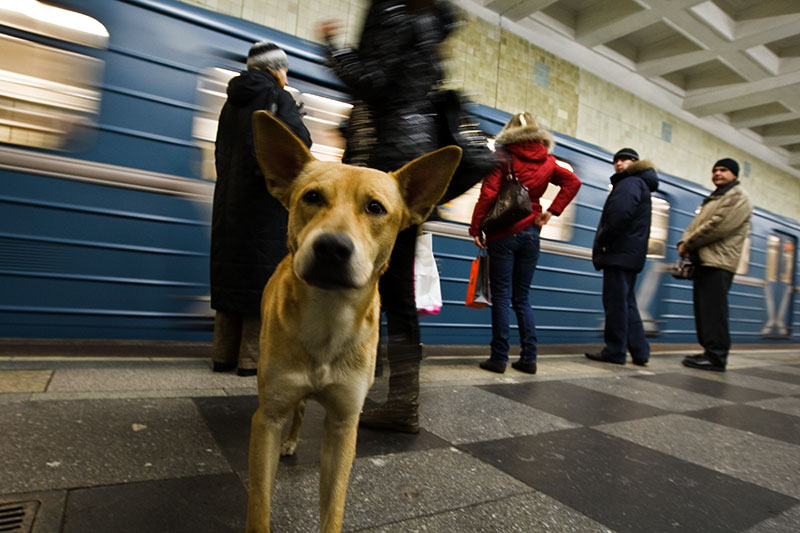 “What? Questions you’ve got?”

“Wrong place? Well, we still are learning what’s wrong and what’s not.”