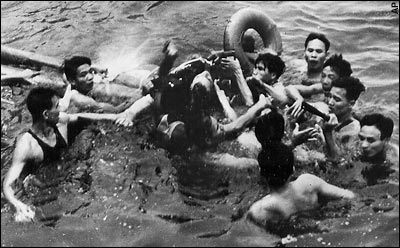 This presidential elections in USA has been brought to light the story of this man, living now in poverty in a small wooden hut at the suburbs of St. Petersburg.

Probably everyone knows about the accident John McCain had during his service in Vietnam, when his plane was shot down by the Vietnamese (as was thought before) missile. It’s a well known fact that during that war thousands of Russian officers and military engineers helped the Vietnamese Communist Army to fight against US troops. All the newest weapons were also brought by Russian comrades from the North and Vietnamese were taught how to operate it properly. During one of such “demonstration” the John McCain’s plane was shot down to the ground by this man on video.

According to his words it was the 13th missile that hit the target finally, twelve missed. He says it was a great luck that a group of Russian soldiers has arrived to the crash site, and ordered Vietnamese not to harm the shot down pilot but just to take him out of the river, because, he explained, usually locals hammered down with their stone hoes any American pilot they managed to find, so actually they saved him life. Such an attitude locals as a revenge for their burned to ground villages by American napalm. Russian officer was rewarded with the honorable “Red Star” medal and 1000 Russian rubles addition for his retirement pension.

Also later he have visited a few times McCain in the Hanoi prison, where they were implementing special Soviet “tortures” for American prisoners: they forced them to study Communistic literature, like “Capital” by Karl Marx and many other thick Soviet ideological books. When he was asked if he would meet McCain what he could ask a man who is now a popular American politician – he said “I wanted to ask him if he finished reading Karl Marks”. Also he said, he didn’t want McCain to become a forty-forth US president, because as he says “McCain hates Russia way too much, though I can understand him”.
He also demonstrated some booty he got from Vietnam, among them is the McCain’s “paratroopers book” – some special military ID the pilots and parachutists had to have with them while on duty.

Just a few days ago it was published that he has passed away.

Below you can see one of his last interviews (on Russian):