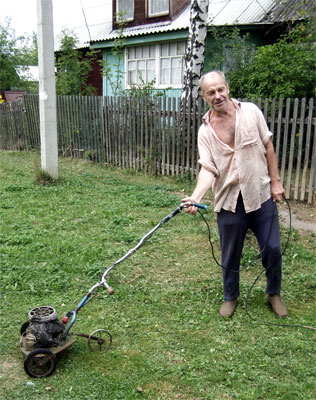 It is very hard to imagine, that people of Soviet Union didn’t have access to many simple appliances many Americans or Western Europeans used every day. For example such a simple thing as a lawnmower was totally absent in Soviet Russian homes. First of all because only village citizens had a right to have a private house – citizens didn’t live in private houses – only in multi-stored, state-owned buildings, so they simply had no lawns to cut, as well as those countrymen who had a private house were too poor or to busy with working in state farms to take care of some lawns.

But still there were lucky ones, those who were lucky enough to have a lawn to take care of and time to do this. They wanted to have a lawnmower but couldn’t buy it – nobody sold them, again, because all the shops were state owned and all suppliers to the shops were state owned factories, producing things according to the Soviet Party Plan without any correlation to the demands of those minor fortunate lawn-owner group members. So they had to build lawnmowers themselves. Different parts of other more available house hold appliances were used, like: child bicycle, baby trolley and the engine was taken from Soviet washing machine.

This particular lawnmower still works and sometimes is used by this Russian man on his “dacha”, the summer wooden cottage where he spends some of his weekends, like many other Russians do. 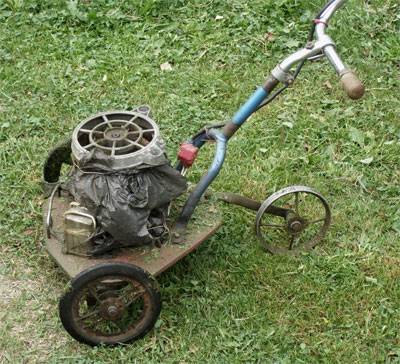