People say that some pictures from the past might be photoshoped. Yes it can be true. But what is the truth anyways? Was the “authentic” photos from times passed long time ago always authentic and true?

Here are a few examples of how Soviet authorities “photoshopped” their photo-chronicles without even using this popular Adobe software. And the whole word got those images as true and authentic.

On the pic above you can see Stalin and co. going for the walk, on the image to the right there are four people and to the left.. three are left. And look how did they manage to recreate the background. This one, from the left part, was published officially. And the guy who is missing was executed. 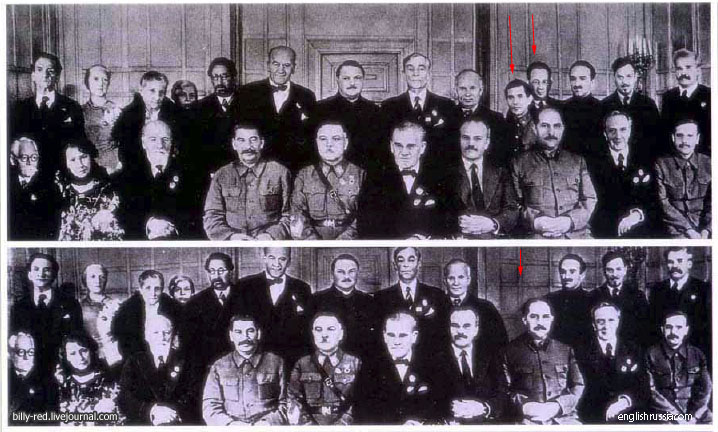 That’s another group shot. On the top part of it there is how it was in its original state.
The one below is edited. Two guys are missing. They were also executed. And in such manner it was published. Look what a precious job was done. In the era of no-computers-available. 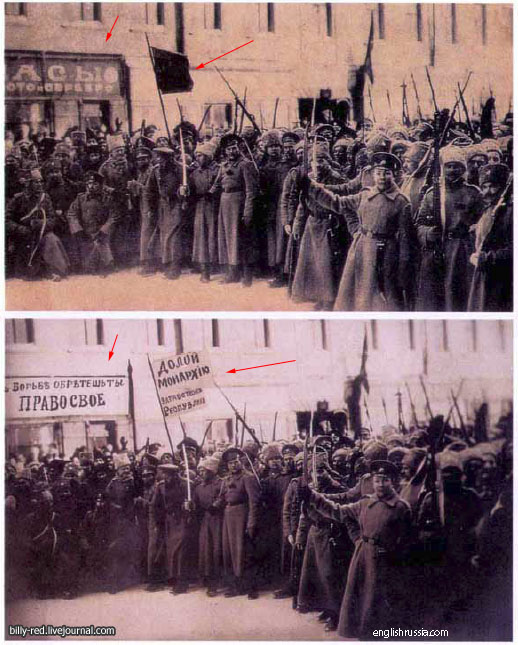 This one is not so brilliantly remastered. If to look closer one can spot some roughness in its post-processing. Russian authorities changed the shop sign “Watches.Gold.Silver” to “In Fight You’ll Get Your Right”. Yeah, why not?
Also the flag, previously just red got the sign “Down with the Monarchy”. 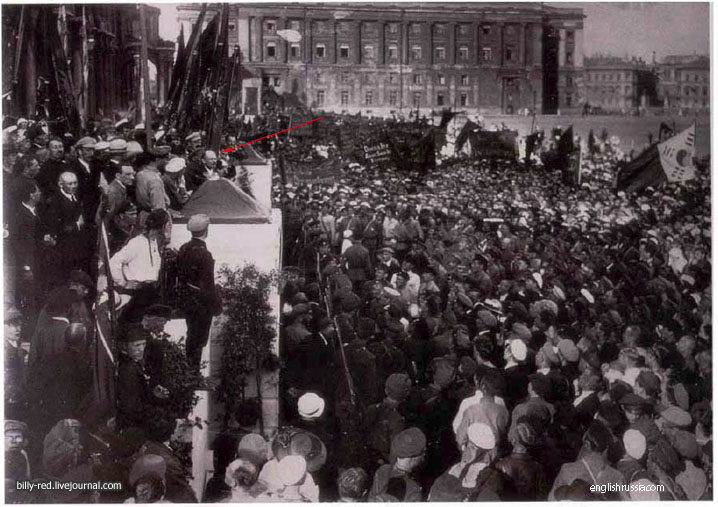 This is a shot of Lenin reading his speech on the city square.
People who published his shot decided it’s way too little people listen too him to impress newspaper readers all over the Russia so they… 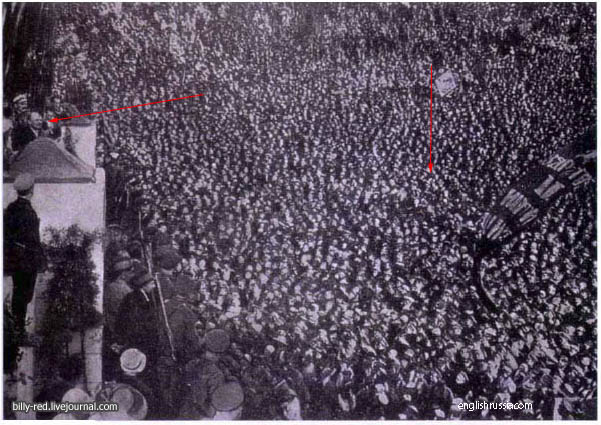 Added some more listeners. A lot of them. I wonder how many hours of work took those things to be made without the Photoshop and a computer. 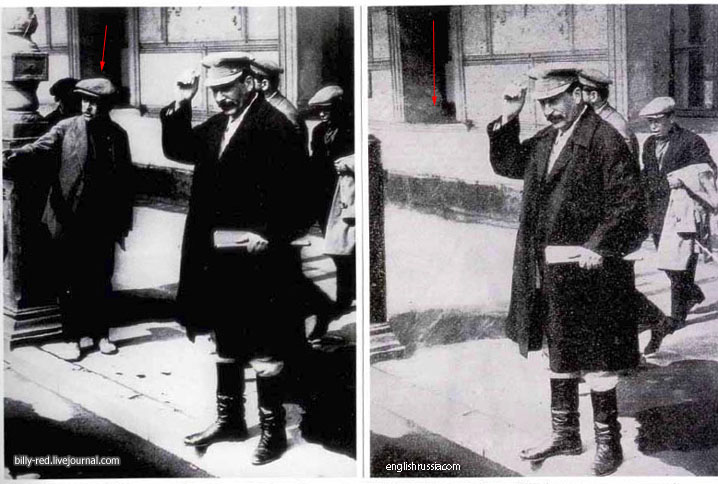 That’s Stalin. On the photo to the left one can see a guy, a comrade, showing a way to Stalin. “This way please!”.
But how can somebody show the way to Stalin thought authorities? So they removed that guy. None should point the way to the leader of Russian people. Never. 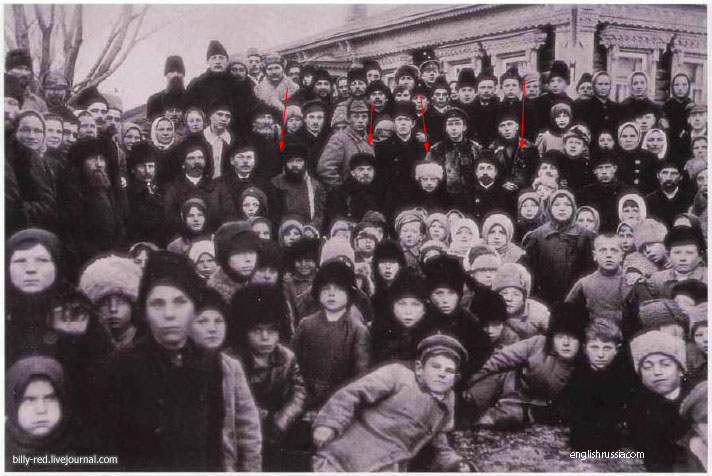 On this shot you can see Lenin with his wife sitting in the middle, surrounded by farmers and their kids.
But just a little time passed after this photo was made and many of those farmers were executed – just because they had too much money and didn’t want to share it freely with surrounding poor neighbors. 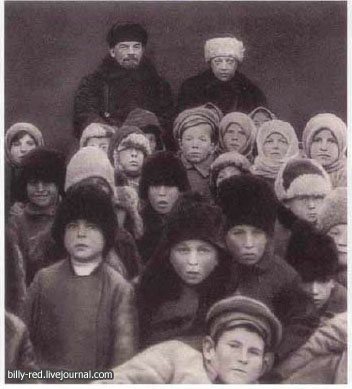 So the photo that was published looked like that. All those who were executed were removed. Including kids.

Almost the same story happened with this photo. In the middle of it one can see Chapaev, famous Russian army officer, surrounded by other Soviet army seniors.
But many of the early Communist leaders were then executed by the order of Stalin. So the photos were also corrected when published. 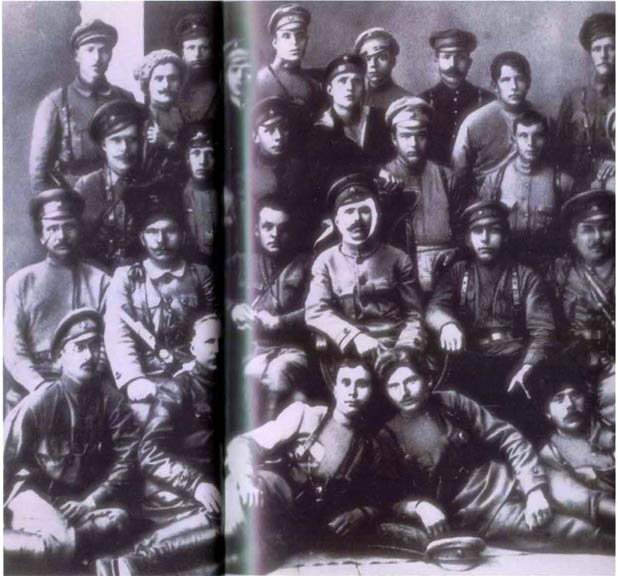 And much more can be found in Russian archives. Was this happening only in Russia? Remember those speculations on “Were or Weren’t People on the Moon?” etc. So what is really true and what is photoshop sometimes is hard to understand.