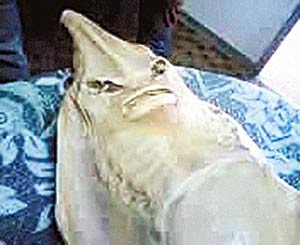 They were so shocked about the creature, it was moaning like a human, not as fish, weighed 200 pounds and was rotating its eyeballs.

The video above was made by one of the fishermen made a video record of the creature, using his camera phone, little by little the video clip has been shared between people of Azov town in Rostov region, and have reached Internet.

When people from news came to the city to learn more about the creature fishermen told them that they… have eaten (!) the creature and admired its taste.

54 thoughts on “Strange Creature from Azov”