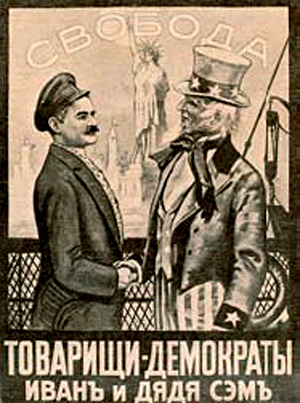 It’s interesting but just before the communist got to power as a result of October Revolution of 1917, there was a USA friendly propaganda in Russia.

For example this poster is from 1917, a few months before the communist’s takeover. It says: “Friends-Democrats – Uncle Sam and Ivan”.

But just a few month later uncle Sam became a negative hero and stayed so 70 years.

29 thoughts on “Uncle Sam was friend of Russian Ivan”