This is the guy who embarassed the Russians and astounded the world, when in 1987 at the age of 19 flew a Cessna 172B undetected all the way from Malmi airport in Helsinki, landing the craft in Moscow’s Red Square.

Mathias Rust (born 1968) is a German pilot who, in 1987, at the age of 19, flew from Hamburg to Moscow, eluding the Soviet air defences and landed in Red Square near the Kremlin.

After leaving Hamburg on May 28 Rust refuelled his Cessna 172B at Helsinki-Malmi Airport. He told air traffic control that he was going to Stockholm, but he turned his plane towards the east. Rust disappeared from the Finnish air space near Sipoo. He headed towards the Baltic coastline and turned towards Moscow. By chance, he flew into the Soviet Union on the national border guard’s holiday, and the lax security that resulted allowed him to fly into Soviet territory unnoticed. I think it was even by chance but the date was chosen by him on purpose because it’s well known that during this holiday every national guardian is drunk no matter he is engaged on his post or resting in the barracks.

Rust flew straight towards Moscow and landed in Red Square. He was arrested immediately by the Soviet authorities. Though on this photo he doesn’t look like immediately arrested, authorities seem like enternained by his deed. 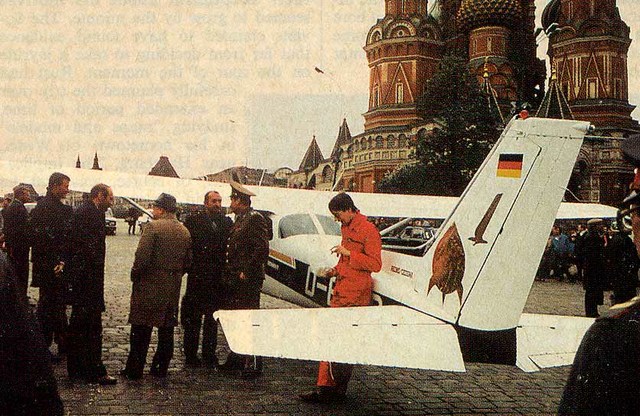 Mikhail Gorbachev took advantage of this, replacing the defense and air defense ministers (both of whom were opposed to glasnost and perestroika) with men who supported his policies. More than 2,000 officers (again, most of whom were opposed to Gorbachev’s reform) lost their jobs. This move was critical in winning over the previously fiercely conservative and anti-reform military. I guess if it happened today it could be interpreted like a covert action for coup lead by Gorbachev.

Rust’s trial started in Moscow on September 2, 1987. He was sentenced to four years in a labour camp for hooliganism, disregard of aviation laws and infringement of the Soviet border. After a prison sentence of 432 days in the Soviet Union, he was returned to West Germany on August 3, 1988. It’s not clear was his plane returned to him or was it confiscated.

13 thoughts on “Landing On The Red Square”