Some time ago there was a political conflict between Russian and the small country on its South called “Georgia”.

Georgia is a part of former Soviet Union, so most of people there speak Russian and a lot of Georgian people live and work in Russia, because average monthly salary in Georgia doesn’t exceed $30 (compared to $400 in Russia). Also there are some Russian army troops in Georgia since Soviet Union times.

So there was a conflict and major American news agencies mentioned this conflict in their news reports. But it seemed so that some people in USA didn’t understand that there is another Georgia and made a big discussion in Yahoo newsgroups. They were really shocked to learn that USA state Georgia is invaded with Russians.

Look this screenshot of Yahoo newsgroups: 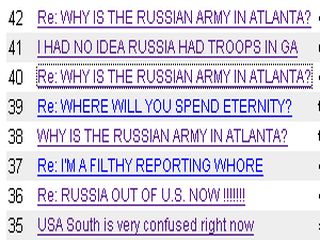 “WHY IS THE RUSSIAN ARMY IN ATLANTA?
I WANT ANSWERS DAMMIT!!!”

“WHY ARE PUTIN’S TROOPS IN ATLANTA?
have not head of this until now – this is outrageous !”

40 thoughts on “Where Is Georgia?”