It seems to be an old Russian tradition to make houses from matches as a gift or just for fun.

Do you want to learn how to build a house from matches? Here is a little howto from the Russian artist G. Wolf. 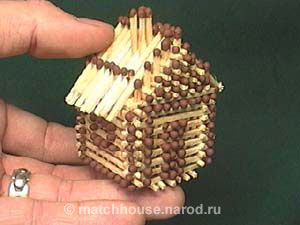 It would be built without a drop of a glue, and you won’t need those tools in order to build  a house. Place a CD box on the desk and we’ll start the process.
Put two matches, parallel each other, in the distance a little smaller than a length of a match. Now put 8 more matches on top of the first two, like on the picture. Now put a second flooring of 8 matches, perpendicular to the previous layer. It’s better to put all the matches on an equal distance from each other. 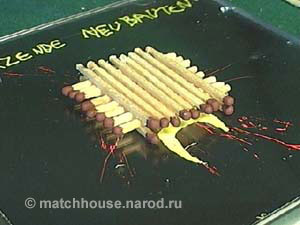 Now we are building a “well”, 8 layers tall, like on the picture. Each next match should be aligned with a head perpendicular to the previous. 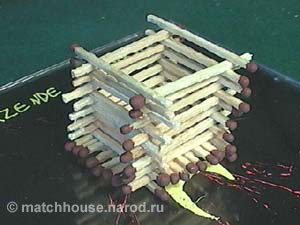 And now on the top of this well we are putting another deck of 8 matches. Matches on the top deck should be aligned contrary to the lower one. Now on the top of our thing we are putting a coin. Now pressing on the coin with one finger, insert a match in each corner, as shown on the picture below. If there is no space between lower matches you can slightly spread them with another match, as shown on the photo. But be carefully so that a “house” won’t slide from the lower deck of matches. After you have inserted 4 matches in the corners you should have something like this: 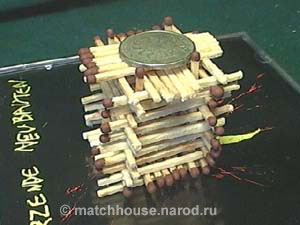 Now carefully inserting matches between the corner ones, across the perimeter, sliding apart the matches with another match, and pressing with a finger on the coin. And now after all the matches inserted, press on the wall of the house with your fingers, and remove a coin from the top with another match. Like on the picture. Now you can take the house in hands. Now push these last matches on the top even more further so that they press the deck under them. Like on those two pictures. We have just finished making a foundation for the house, yes we were building a house from the top, now turn in it upside down and put it on its foundation, those heads we inserted before. Like on this picture: Now let’s build the walls. They would consist from two layers of the matches: one vertical and one horizontal. Insert vertical layer from one side of the house: Do same thing from three other sides. Now put the horizontal layer of the wall to all four sides. Each next match should go contrary against the previous, like “head to the right, head to the left”, like on the picture: Ok, almost all is done. Now we need to build a roof. Insert the missing matches in the corners, and pressing to the matches from the downside of the house pull all the matches halfway up, don’t be afraid house won’t break apart now. You should get something like this: Now we are putting the matches on the “roof”, perpendicular to the upper deck. First 2 matches, then 4, then 6 and in two middle rows put 8 matches, like on these pictures: Now between the vertical matches insert sloping matches, heads to middle, like on the picture: Congratulations! That’s all! Your house is ready now! You can decorate it with a chimney  – insert four matches in the roof near each other, or you can add a door and a window – break a few matches by half and insert into the wall pointing the contour of the door or window. It can be a good present to someone or you can just burn it for fun. Keep out from the reach of children!

Photos are from matchhouse.narod.ru, Russian site

27 thoughts on “House Made from Matches”