This is the photo of the first Soviet cellular phone. The development of such devices has started in 1958 as a cooperative project by the group of the Soviet scientists from different cities.

It was a fully functional mobile phone that was placed in the car of the Soviet elite. It had a full duplex link and in order to dial a phone one had just pick up the receiver and dial a number using this big square buttons with letters and digits on them. On the first models there were even old-style round dial. 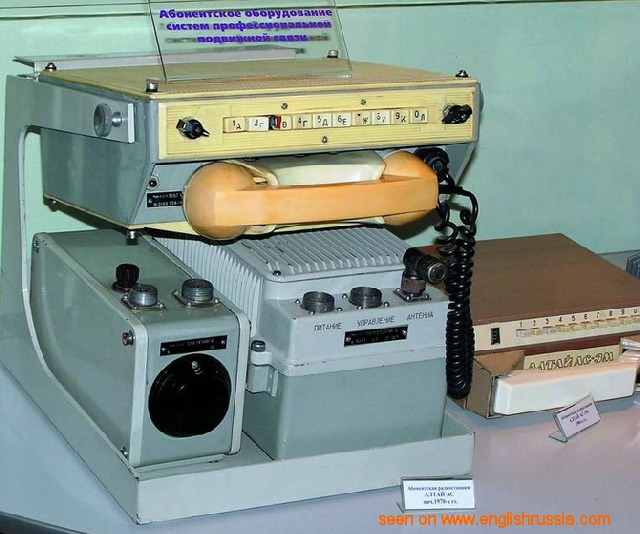 In a common Soviet town the phone base station had only 16 radio channels, but it was enough to serve the local Communist elite with a mobile phone link.

There was used a 150 MHz frequency, so the antenna placed on the roof of a high building could give a coverage area of 40-50 miles.

The first devices were started in production in 1963, and till 1970 more than 30 Soviet cities were covered with this elite mobile phone network. As far as the author knows, in USA there was also such kind of mobile telephone system but it started a bit later – at 1969.

The system had even some modern day features as “conference-call”. And there was a hierarchy in using this system. People who hold higher Communist positions could throw of the line the lower posts when they needed to talk urgently but all the lines were busy. Some could call only local numbers and more advanced Communists could call worldwide.

In the late 70s there appeared a new, less monstrous model of the Soviet mobile phone. It could be conveniently placed between front passenger chairs in the car, not in the trunk as before. The Soviet authorities even didn’t think about providing the service to common people. The mobile phone could give another level of freedom to its owner, and it was not what they expected from the citizens.