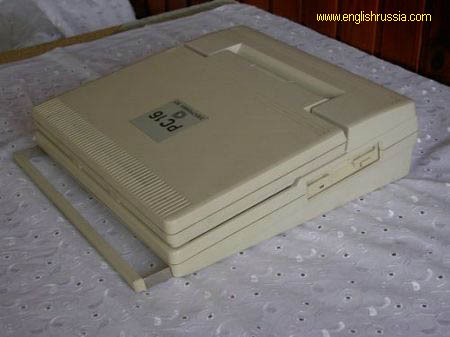 This is first Russian laptop, made under the brand “Elektronika”. The production started in 1991 and lasted not very long due to the high price of the device – none of the common people could afford themselves such devices. The price for the computer was around $6000, that equals 25,000 roubles according to that time’s exchange rate, when the average salary across the country was 500 roubles (50 times less!). As we mentioned before in the article “How the richest Russians became rich” at that time there were practicaly no people who earned a lot and could afford such hardware for personal use. It was mainly produced for larger industrial factory engineers so that they could carry it along with them and plug to the larger machines they operated. It has been reported that not more than a thousand of such computers were produced. The exact technical specifications are not very clear. According to people whoÂ used them the specifications were as following:Â It’s a very rare exhibit, due to its limited production. Many people even don’t know that in the late 80s there were a laptop production in Russia.